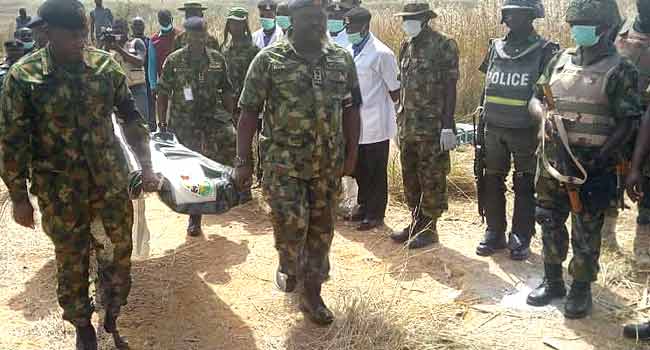 Muhammed Alkali, the Nigerian Army General, whose body was discovered in a well at Guchwet Village in Shen District of Jos South local government area of Plateau State will be given a befitting burial, the Nigerian Army has said.

Muhammed Alkali is the immediate past Chief of Administration of the Nigerian Army.

He was declared missing on September 3 while travelling to Bauchi State from Abuja.

Speaking upon discovery of his remains on Wednesday, Brigadier General Umar Mohammed, who led the search and rescue operation said Alkali would be given a befitting burial after a parade.

The discovery of his grave was announced on Friday by the General Officer Commanding, 3 Division, Rukuba Barracks, B. A. Akinruluyo.

He disclosed that those arrested in connection with the killing of Alkali confessed that the remains of the deceased were exhumed and reburied.

Akinruluyo who addressed the press on the case however stated that the identities of all those behind the killing were known and the military would leave no stone unturned to apprehend them.

He gave details of the situation that surrounded the killing of the retired Army General.

Alkali was 58 years old and enlisted as Officer Cadet at the Nigerian Defence Academy in 1980.

He was commissioned as a second lieutenant in 1983.

He held two master’s degrees from the US National Defense University (NDU) in Washington DC.

He also holds a Graduate Certificate in International Counter-terrorism from NDU, had a bachelor’s degree in War Studies from University of Baluchistan, Quetta, Pakistan and a Postgraduate Diploma in Diplomatic Studies from the University of Westminster, London, UK.