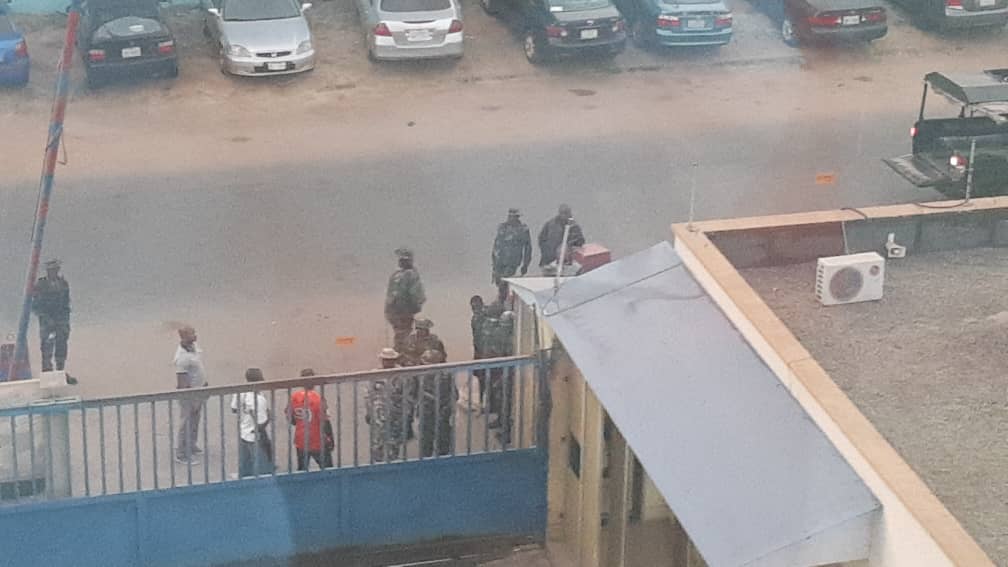 The Abuja and Maiduguri offices of a national newspaper, Daily Trust, were invaded by armed soldiers on Sunday.

Two staff of the newspaper – Uthman Abubakar, regional editor, and Ibrahim Sawab, a reporter – were said to have been arrested.

The two offices of the newspaper were sealed off.

The soldiers who invaded the Maiduguri office were supported by operatives of the State Security Services and the Civil Defence Corps.

The invasion is believed to be in connection with the news report of the newspaper which gave details on the Nigeria’s troops preparations to attack the terrorists group said to be in Baga, Borno State.

That, it said, was contrary to the belief in some quarters that it was because the terrorists were better equipped than Nigerian soldiers.

It stressed that psychology was more potent in the war than any other weapon.

The Nigerian Army said that some individuals and a section of the media in the society had not helped matters as they propagated the falsehood promoted by Boko Haram.

The position of the Nigerian Army was made known in a statement issued by the Director of Army Public Relations, Brigadier General Sani Kukasheka Usman.

The statement reads in a part:  “The attacks on NA troops are not as a result of superior arms or equipment, rather it is due to the use of psychological weapon which is as good as any lethal weapons. The psychological attacks have been further aggravated by some unpatriotic elements in the society that take joy and pride in propagating such falsehoods.”