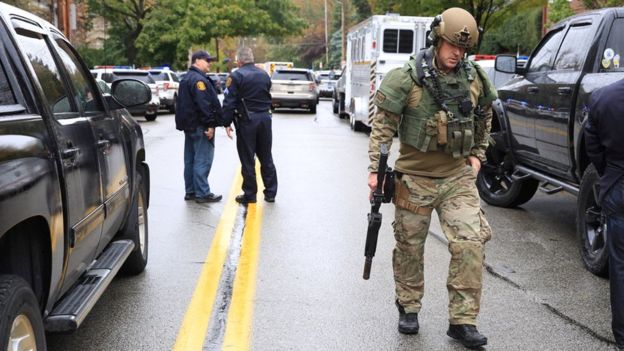 Many people were killed at the Tree of Life synagogue in the United States city of Pittsburgh, Pennsylvania on Saturday after a gunman went on a shooting spree during service.

The number of casualties could not be ascertained as at the time of this report.

Several other persons, including four officers were injured too.

The suspect is said to be one Robert Bowers who is 46 years old.

He has since been arrested by the police and being treated in the hospital.

The synagogue serves the Squirrel Hill neighbourhood, which has one of the largest Jewish populations in Pennsylvania.

The gunman was said to be shouting anti-Semitic abuse as he entered the building, armed with an assault rifle and two pistols.

Reports said he barricaded himself in a room at the synagogue.

US President Donald Trump describe the shooting as very terrible, adding:  “To see this happen again and again, for so many years, it’s just a shame.”

He said the US should “stiffen up our laws of the death penalty.”

“These people should pay the ultimate price. This has to stop,” he said.

He added that incident had little to do with US gun laws.

“If they had protection inside, maybe it could have been a different situation,” he said.