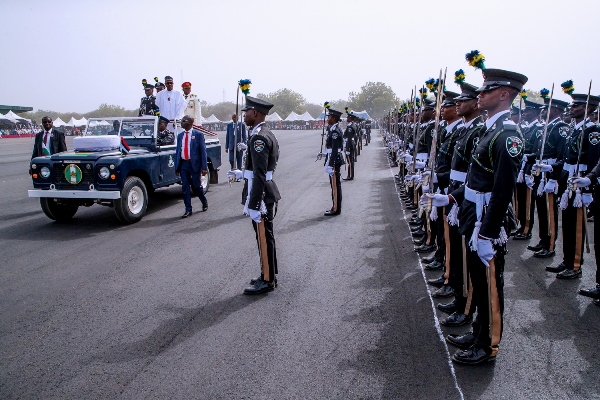 In view of the security needs of the country, no fewer than 6000 constables have been formally absorbed by the Nigeria Police Force.

The constables have passed out of police schools across the country after a seven months training.

The Inspector General of Police, Ibrahim Idris, made this known on Saturday during the passing out parade carried out in Maiduguri, Enugu and Minna.

Idris was represented in Maiduguri by Assistant Inspectors General of Police in-charge of Zones 3 and 9, Mr. Kayode Aderanti; in Enugu by Mr. Hosea Karma, and  Minna by the Niger Commissioner of Police, Dibal Yakadi.

Said he:  “The recruitment of these 6, 000 recruit constables who have completed their training across the country is to meet the UN recommendation of one policeman to 400 people.

“The Federal Government thought it wise to commence recruitment of another 10, 000 police to meet the UN recommendation.

“It will interest you to know that the federal government has made funds available for the four premier colleges of Ikeja, Kaduna, Oji-River, Maiduguri and other police training schools across the country.”

He said adequate training was given to the constables as they were taken on “special lessons on community policing, maintaining peace in conflict areas and the use of firearms, public order act and others.’’

“The constables, who were drawn from six states, underwent six months intensive course on all aspects of modern policing and human rights issues.

“This passing out parade comes at the right time as the preparation for general election which will commence in few months to come,” he said.

The police boss called on the new constables to show diligence, selflessness and patriotism in the discharge of their duties.

He said, “As policemen, you must have respect for the rule of law, fundamental human rights, and loyalty to the nation and the Force must be resolute and total.’’