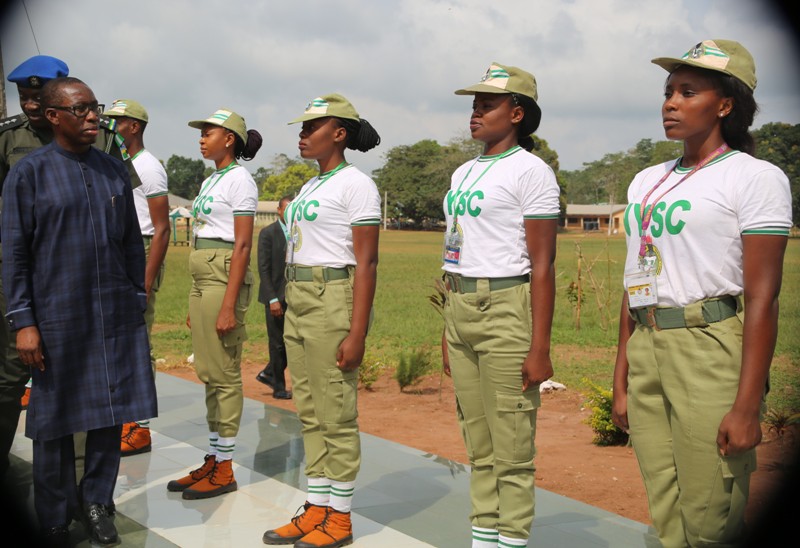 Delta State Governor, Dr. Ifeanyi Okowa, has ordered total renovation of the orientation camp of the National Youths Service Corps (NYSC), saying comfort and security of Corps members should be of utmost priority.

Ifeanyi Okowa who paid an inspection visit to the NYSC orientation camp at Issele-Uku, Aniocha North local government area of Delta State, observed that the facilities at the camp had not met his dream standard.

According to him, “welfare of Corps members is our priority because, they are here to serve the nation through our people; those who will be in school, will be teaching our children, those deployed to hospitals will be treating our people.”

“There is a lot of work to be done here, within the next six months, we will transform this camp,” he said.

He added that “though, most of the things we will do were not captured in the projected budget for 2019, working with the Delta State House of Assembly, we are confident that this place will be transformed in the next six months.”

Speaking about threat to revoke some of the contracts going on in the Camp, Okowa said, “the contractor has explained why the job was slow and assured that he will complete that particular project before the end of January 2019.”

The NYSC coordinator in the state, Mr. Benjamin Omotade, who took the governor round the facilities at the camp, thanked Okowa for his commitment to developing the orientation camp.

Mr. Garba A. who is the Regiment Sergeant Major (RSM) in the camp, observed:  “This is good development, the governor has taken time to inspect every facility in the camp.  We are confident that in the next few months, this will be one of the best NYSC orientation camps in the country.”

Meanwhile, Asaba was agog on Thursday as the first international flight landed at the Asaba Airport to convey the Nigeria Super Eagles to South Africa, with the Ifeanyi Okowa and Captain Yahaya Pam, Pilot, Max Air, saying that facilities at the airport were among the best in the country and of international standard.

The Boeing 737 aircraft belonging to Max Air, one of Nigeria’s leading airline touched down at exactly 5:22pm to palpable excitement with members of the State Executive Council, a delegation from the Palace of the Asagba of Asaba and people of Delta on ground to witness the historic event which would forever remain indelible in their minds.

Speaking with journalists at the airport, the pilot of the airplane, Captain Pam said the Asaba Airport runway was among the top three in the country.

“It is very smooth, good and long in line with international standards.”

He added that the ramp was of top notch.

He commended the state government for the facilities at the airport.

Ifeanyi Okowa, represented by the Secretary to the State Government, Hon. Festus Ovie Agas described the event as a dream come true and a major feat in the fulfillment of the SMART agenda of government.

He explained that the recent upgrade of the airport, especially the improvement on the runway had made the effort possible.

He stressed that a provisional approval was given to the airport to airlift the team to South Africa for their match against Bafana Bafana.

Obi Ngozi Kowea, leader of the delegation from the Asagba of Asaba palace, said that with the successful landing and subsequent take-off of the first international flight, critics of Governor Okowa had been proved wrong, and gave the assurance that Asaba people were fully behind him in next year’s election and throughout his tenure in office.

In their remarks, Information Commissioner, Patrick Ukah, and the Director of the Asaba Airport Project, Mr. Austin Ayemidejor, said that the Nigeria Civil Aviation Authority NCAA had upgraded the Asaba airport to category six.

Members of the Super Eagles boarded the airplane with code number 5N-MHM at 6.55 pm in high spirit enroute the Republic of South Africa ahead of Saturday’s clash with the Bafana Bafana football team in a Nation’s Cup qualifier.