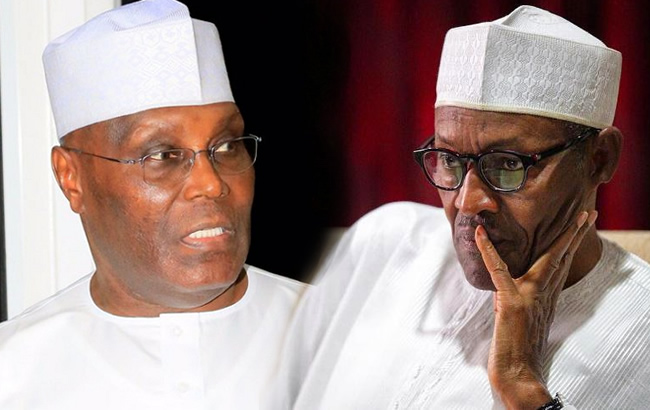 The National Chairman of the Peoples Democratic Party, PDP, Prince Uche Secondus, has declared the presidential candidate of his party, Atiku Abubakar, winner over President Muhammadu Buhari in the television programme, The Candidate.

The two candidates appeared on the programme at different times to state what their programmes would be ahead of the coming general election.

They answered questions from the anchor, Kadaria Ahmed during the programme which is organised by MacArthur Foundation in collaboration with Nigerian Television Authority, NTA, and DARIA media.

The two candidates were drilled in question and answer sessions.

But speaking at the presidential campaign of Atiku on Thursday in Asaba, Delta State, monitored by FrontPage,  Secondus did an assessment of the two candidates based on their performances.

He concluded that from all indications, it was obvious that Atiku was a better candidate.

He said while Buhari crumbled in the face of the questions fired by the anchor, Atiku was stronger.

Addressing the crowd in a mixture of English and the pidgin version, Secondus said:  “Did you see him (Atiku) on television last night?  Did you also see Buhari the other day? Who won? (the crowd shouted, Atiku)….

“You know he (Buhari) couldn’t answer questions when that woman fire am.  But when the woman fired our president (Atiku), the best came out of him.  You can see the president who can engage.”

Secondus also seized the opportunity to warn the Independent National Electoral Commission against rigging in the coming election.

He promised the people of Delta that Nigeria would be a better place if Atiku is voted in.

Addressing the crowd, Atiku thanked the people of the state for continuously making Delta a PDP state.

He said all the infrastructure the roads, hospitals, schools in the state were built by PDP government.

He said there would therefore be no reason for the people of the state to vote for another party.

“Let me tell you my commitment to Delta State if you elect me as your president.  Your ports that have been abandoned, I will reactivate the ports in Delta.  I will make sure that those ports are working and create jobs.

“Secondly, all the infrastructure projects started by the government that have been abandoned because you are a PDP state, I will complete them.  You have been loyal to PDP.  So, we will pay loyalty.