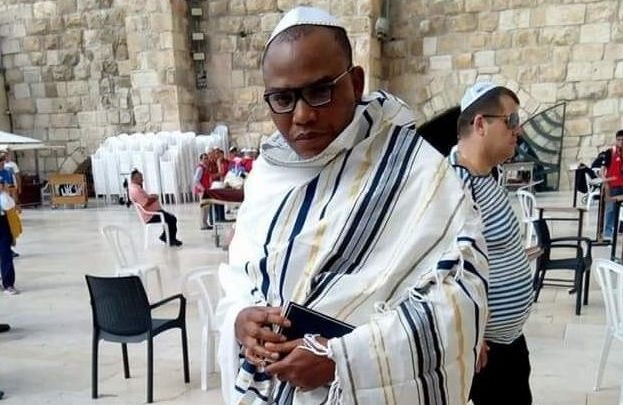 Nnamdi Kanu, the leader of the Indigenous People of Biafra (IPOB), Nnamdi Kanu, has revealed that members of his family smuggled him out of the country.

He claimed that the family did that when the soldiers were coming for him.

“Nigerian Army came to my house to kill me…

“My people evacuated me before they could get to me and they smuggled me out of Nigeria. I would say,” Kanu said in an interview on an Isreali television station posted on YouTube.

He alleged that no fewer than 28 people died during the military’s attack on his house.

Kanu who said he felt safe in Israel than any other place in the world called on Israel to come to the aid of the Igbo people advocating for a Biafran nation.

“Israel has to live up to their obligation to defend Judaism and Jewish faith all over the world.

“We are being persecuted. We are suffering as a people and I believe it is the responsibility of Israel to make sure that Biafra stands as an independent entity in Africa.”

He added that “Biafra has over 70 million people scattered all over the world. They have called us the wandering Jews of Africa. Those that identify themselves with their Jewish heritage are about 50 million people.”

He explained that a significant number of the population practise Judaism.

“When Christianity came with colonialism, a lot of our Jewish practices were suppressed. We were made to feel ashamed of our Jewishness. We want to go back to the way we were before the British came. Most of our problems were basically made by the British.

“We want an independent Jewish State, a Biafra that is absolutely independent of anything that has to do with Nigeria, for the simple reason that we were independent before the British came. There is paranoia that, should Biafra get closer to Israel, 70 million people would somehow flock to the land of Israel, but that is not the case…”

Kanu, recently resurfaced in Jerusalem, Israel after disappearing from Nigeria in September last year at a period the military stormed his house in Abia State.

The military was carrying out Operation Python Dance II to stem the tide of violence being championed by IPOB.

There had been uncertainty about his whereabouts until his pictures were shared online by Radio Biafra.

Meanwhile, the Presidency has vowed to continue to prosecute him upon his arrival to the country.

The Senior Special Assistant to the President on Media and Publicity, Mallam Garba Shehu, who spoke during an interview with the British Broadcasting Corporation, BBC, Hausa Service said “Kanu’s trial would be expected to continue, should he return to the country,” he said.

Kanu was undergoing trial for treason when he disappeared.