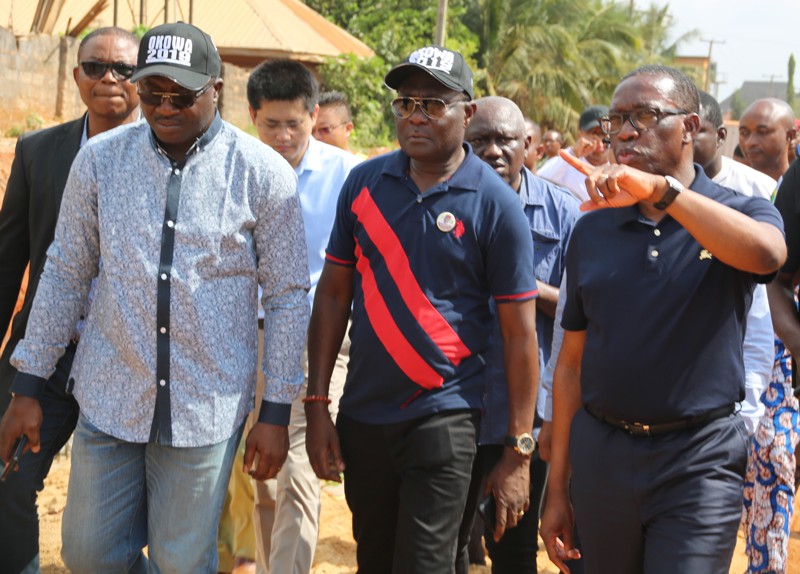 Delta State Governor, Dr. Ifeanyi Okowa, has expressed joy that the people of the state are appreciative of the projects being carried out by his administration to make life better.

Okowa said with their expressions, it was obvious that his government was meeting with the yearning of the people.

The governor made the remark on Friday after inspecting the level of work done at the storm drainage projects, the Mariam Babangida Way, different roads constructed and under construction in Okpanam community.

Fielding questions on how he felt seeing the reactions of the people towards the projects executed by his administration during the inspection tour, Governor Okowa said, “it is a thing of joy that the people are happy with our projects, it shows that we are meeting with their expectations; I was quite surprised with the way the network of roads in Okpanam have impacted on the lives of the people because, obviously, the people were in difficulties before the roads were constructed.”

“As an individual, I am happy that the people appreciates what we are doing and as a government, we will continue to develop our road infrastructure and other infrastructures because, that is the promise we made to the people; we will continue to work hard because the excitement of the people when developmental projects are being achieved brings so much joy to us in government and the network of roads in Okpanam is truly a thing of joy,” he said.

He added that “with the dry season, we will do a lot more in the area of road construction; we are aware that despite our efforts to construct roads in different parts of the state, road infrastructure still needs a lot of attention in our state and we are aware of the importance of good road network to the lives of our people.”

The governor who had earlier, inspected the storm drainage project at Government House, Cabinet Office Road, Ralph Uwechue Way, among others, observed that the projects were in different stages of completion.

According to the governor, “the main project that we inspected today is the storm drainage projects and we saw a lot of progress; we are looking into the end of February for the completion but, from what we saw at the drainage project sites the companies will likely complete the jobs ahead of schedule which is by the end of January; so, I am glad that a lot is being done, the contractors are very serious with their work and that is very good. “

Commissioner for Works, Mr. James Augoye, his Information counterpart, Patrick Ukah, and the Director-General of Asaba Capital Territory Development Agency, Mr. Clement Ofuani were among those who accompanied Governor Okowa on the inspection tour.