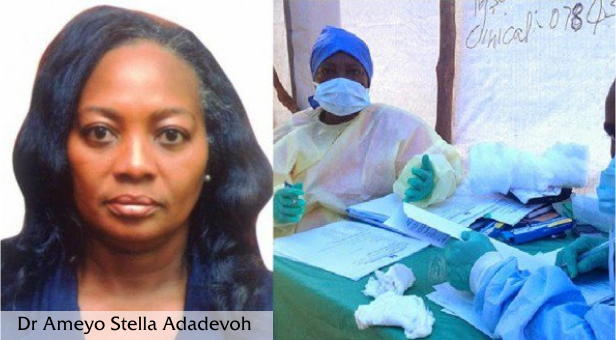 An intense campaign has been mounted to make the Nigerian government honour Dr. Stella Ameyo Adadevoh by naming the Nigeria Centre for Disease Control, NCDC, after her.

Adadevoh was the Lead Consultant Physician and Endocrinologist at a private hospital, First Consultant Hospital.

She diagnosed and contained the first ever Ebola patient in July 2014 and refused to discharge him to prevent the spread of the disease.

She contacted the disease herself and died along with three other colleagues.

In view of her heroic feat, one Dada Olusegun has petitioned President Muhammadu Buhari, calling for the NCDC building to be named Stella Adadevoh.

The petitioners said the call was an opportunity for the government to recognise Adadevoh’s heroism.

“I believe renaming the Nigeria Centre for Disease Control (NCDC) who’s act for establishment has just been signed by President Buhari after Dr Stella Adadevoh House is no doubt the biggest tribute Nigeria could ever give her as it would create a culture in which devotion and dedication to one’s vocation is habitual,” the petition reads in part.

The petition reads further:  “As Nigeria heaves a collective sigh of relief after being declared free of Ebola, one woman is being widely praised for helping to ensure a more devastating outbreak was avoided.

“Dr Stella Ameyo Adadevoh raised a red flag when attending to a Liberian patient at the First Consultant Hospital in Nigeria’s main city, Lagos, in July.

“Patrick Sawyer had just flown into the country, already sick – he should never have been allowed on the plane.

“Nigeria had never had an Ebola case before so it was an impressive piece of diagnostic work.

“Whilst caring for Mr Sawyer and protecting the nation from the virus, Dr Adadevoh and her colleagues were themselves at great risk.

“Without her dedication, it is quite possible that the World Health Organisation would not have declared Nigeria – the most populous country in Africa – Ebola-free. The significance of her actions, and those of her hospital colleagues, cannot be overstated.

“Adadevoh was born in Lagos in October 1956.

“Her father was Babatunde Adadevoh, a professor of chemical pathology and, between 1978 and 1980, the vice-chancellor of the University of Lagos.

“Her great-grandfather was the Nigerian nationalist Herbert Macaulay (himself the grandson of Samuel Ajayi Crowther, the first African Anglican bishop). She lived most of her life in Lagos, spending the last 21 years working at the First Consultant hospital in Obalende on Lagos Island, where a statue of Macaulay still stands today.”