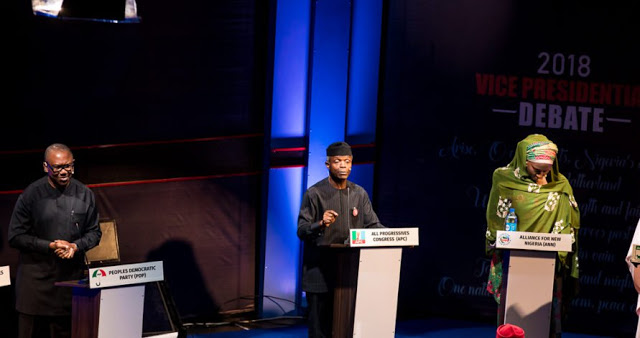 The Vice Presidential Debate organised by the Nigeria Election Debate Group and Broadcasting Organisation of Nigeria held in Abuja on Friday, with Vice President Yemi Osinbajo of the All Progressives Congress, APC, and Peter Obi of the Peoples Democratic Party, PDP, countering each other.

The main issue of controversy is the economy of the country.

Other running mates at the debate were Ganiyu Galadimawa of the Allied Congress Party of Nigeria,   Young Progressives Party, Mrs Umma Getso, and the Alliance for New Nigeria, Mrs. Khadijah Abdullahi-Iya.

Osinbajo and Obi were sharply divided over the state of the economy.

While Osinbajo’s position was that the economy had improved in the last few years of the Buhari administration, Obi debunked saw it differently.

According to Obi, rather than work on improving the economy, the government was busy running after looters.

Osinbajo however stressed the importance of the fight against corruption, arguing that the treasury would continually be looted if not secured and thieves brought to book.

Osinbajo also spoke on the reason for the payment of oil subsidy to marketers.

His words:  “Now, let me say that if today, you are to remove subsidy, petrol price could go as high as N220 per litre or higher.

“There is no country in the world, not even the wealthiest ones that don’t run some type of subsidy or the other.”

He said with the deregulation of the downstream petroleum sector, there had been a significant increase in the availability of petrol throughout the country for the savings of N1.4 trillion on subsidy payments alone.

Accusing the government of not doing the right thing as regards oil subsidy, however, Obi countered Osinbajo.

“What we are subsiding today is inefficiency. If you get it right, the prices can still come down. There is no way a country can have a budget of N340bn for health, which translates to N5 a day for (each of) its citizens, and then pay a trillion for subsidy,” he said.

He argued further:  “There is no way you can have an education budget, which is the most critical component of the development at over N400bn and you’re paying subsidy of a trillion. It is a waste. You need to reverse it because you’re not dealing with the engine that will drive your economy tomorrow.

“Why are you actually subsiding? Nigeria has one of the lowest car ownership in the world. It is 10 (cars) per 1,000 (citizens).

“So, we have only two million vehicles and you’re paying almost a trillion when you have 87 million people that are poor. You can’t do that. You need to reverse it and, I can tell you, if you do the right things, the price will come down.

“You are just paying for the delay in importation, the number of time cargos stay in the ports and so on. We can’t continue to pay for inefficiency in this country. I can tell that if you can remove it and do the right things, the price of petroleum will come down.”