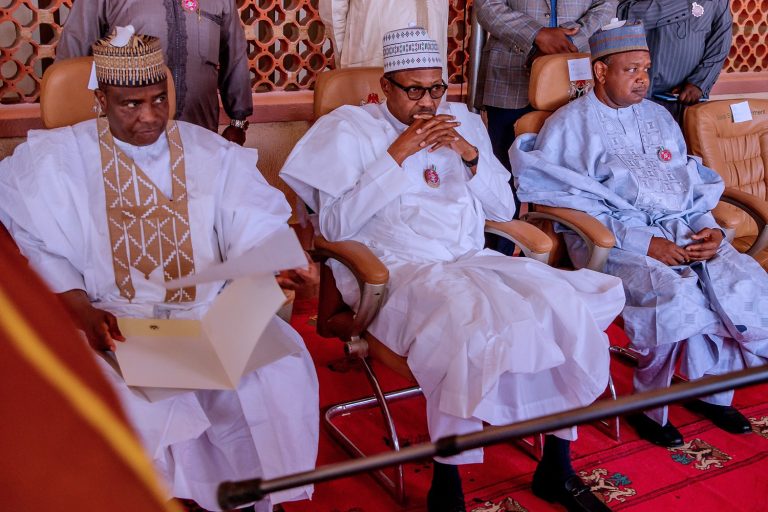 Buhari and Tambuwal during the condolence visit in Sokoto
SHARE

A suitable memorial will soon be put in place to immortalise former President Shehu Shagari by the Federal Government.

“The Federal Government will in due course institute a suitable memorial to the late former President,” Buhari said in his letter of condolence delivered to the Governor of Sokoto State, Aminu Tambuwal, during the visit.

Shagari died on Friday at the age of 93 and was buried in his hometown in Sokoto State on Saturday.

Buhari has since directed that the national flags at military, para-military formations and public buildings should fly at half mast for three days starting from Sunday.

In the condolence letter delivered to Tambuwal, Buhari praised Shagari and prayed that his soul should rest in peace.

The letter which Tambuwal read during Buhari’s visit reads:

“I received the very sad news of the passing away of Alhaji Shehu Usman Aliyu Shagari, former President of the Federal Republic of Nigeria.

“This, indeed, is a grievous loss, which will be felt throughout Nigeria, irrespective of any difference. The late Alhaji Shagari was a landmark figure being virtually our last link to the post-independence government of Alhaji Abubakar Tafawa Balewa , and the first elected Executive President of Nigeria.

“Please convey to his immediate family, the government and the people of Sokoto State my heartfelt condolences on the passing away of this great statesman.

“The Federal Government will in due course institute a suitable memorial to the late former President.

“May his soul rest in peace.”