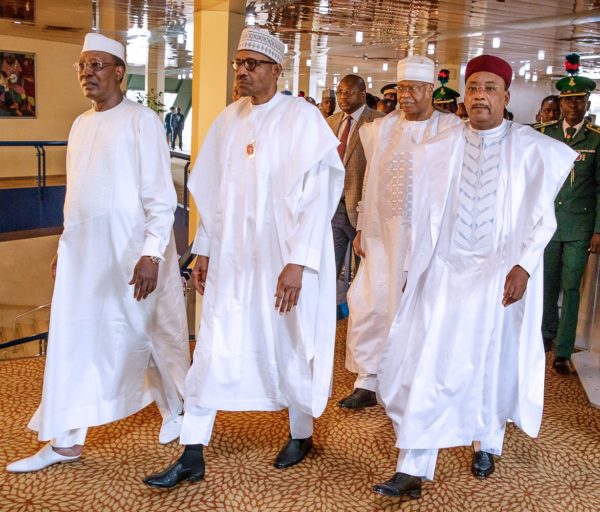 Heads of State and Government of the Lake Chad Basin Commission (LCBC) on Saturday resolved to restrategise with the aim of intensifying their efforts to bring a quick end to the insurgency by Boko Haram.

The commitment was restated at the meeting which was held in Abuja and attended by Presidents Muhammadu Buhari of Nigeria,  Mahamadou Issoufou of Niger and Idriss Deby Itno of Chad.

Also present at the meeting were President Faustin-Archange Touadera of the Central African Republic, Patrice Talon of the Republic of Benin and Prime Minister of Cameroon, Philemon Yang.

Among other strategies, the LCBC members resolved to seek the support of the community leaders to intensify the fight against insurgency.

This is as they also stressed the need to restrategise to bring relief to the communities affected by insurgency.

The relief would come with the accelerated implementation of the Regional Stabilisation Strategy in the areas of Lake Chad which have suffered under Boko Haram insurgency.

It would be recalled that the Regional Stabilisation Strategy was approved by the African Union Peace and Security Council recently.

The member nations said they would, with the available resources, provide immediate relief to the communities affected by terrorism.

They thanked the African Union Peace and Security Council for renewing the yearly mandate of the Multinational Joint Task Force (MNJTF) for the year 2019, and praised the LCBC partners and international community for their support and contributions.

They pleaded that addition assistance would go a long way in restoring peace in the areas affected by the activities of terrorists.