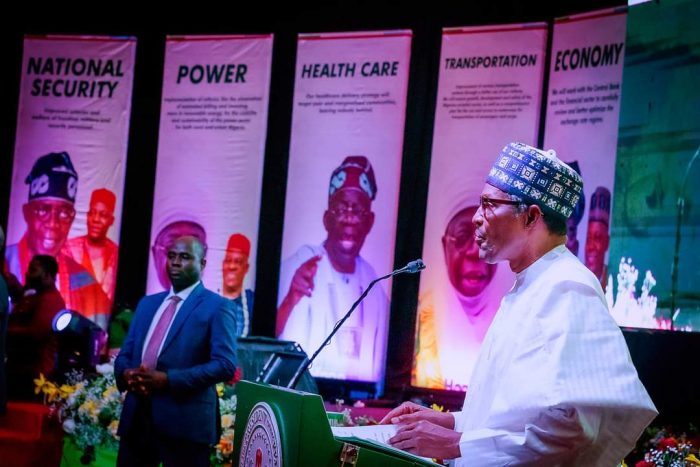 President Muhammadu Buhari on Friday in Abuja declared that despite the unfavourable circumstances of global economic downturns, the Covid-19 pandemic, and very low international oil prices resulting in low revenue, the All Progressives Congress, APC, led government has ”managed to make Nigeria stable,” laying a solid foundation for progressive growth.

The president also said in the seven years journey as a government, the party had every reason to be proud of its achievements amid the inherited systemic corruption and local challenges of insecurity.

The president, who stated this at the unveiling of the Presidential Campaign Council, PCC, and the Action Plan of the APC presidential candidate, Asiwaju Bola Ahmed Tinubu, pledged to be at the forefront of electing the former Lagos State governor as his successor.

He said electing Tinubu would consolidate the achievements of his administration as the presidential candidate has the capacity, visionary leadership and track record to do more.

”It would be disastrous to allow a situation that will lead to the reversal of the progress our country has made. Let me add that I joyfully accept the position of the chairman of the campaign council we are unveiling today.

”Our candidate, Asiwaju Bola Tinubu, is too well known for his capacity and can-do spirit. He stands tall in his track records as a democrat, a champion of the rule of law, a man at home in every part of our country, and a truly visionary leader. All you need to do is think of Lagos in 1999 and 2022!

”I, therefore, want to assure all party members and supporters of our government that I will be at the forefront of this campaign.

”This election is even more important than the election of 2015 that brought us into power. The cost of losing the gains our country has made is much more than the need to stop the haemorrhage that led to our coming together nearly nine years ago.

”I want to charge every member to put in all their efforts during the next four and half months of campaign to ensure we record a resounding victory in all our elections nationwide. The future of this country is safer in our hands,” he said.

Highlighting the achievements of the APC-led administration, Buhari noted that under his watch, Nigeria’s security personnel were better equipped and motivated.

He added that the exploits of the Nigerian Armed Forces in the battlefield had led to massive and successive operational successes in the quest to secure the country and provide adequate protection for lives and property of all citizens.

”The efforts of our men and women in the armed forces over the last years are beginning to yield positive outcomes. We are gradually taking back our country from foreign-inspired bandits, kidnappers, and terrorists in the northeast and northwest and other parts of our country.

”We are equally combating separatists, oil thieves and bandits in the southeast and south-south of the country.

”Our administration remains committed to progressively eliminating all flashpoints of insecurity nationwide. We would triumph over the enemies of our country; in whatever forms and shapes they appear.”

Buhari also scored his administration high on infrastructure, saying ”our commitment to stimulate our nation’s economy through massive infrastructural development has not been misplaced.”

”We are already seeing the unprecedented infrastructure across the country. The real impacts of our efforts will be felt more as the various projects are completed and put to use in the coming days.”

The president who described the APC presidential candidate as ”the Jagaban, my friend, partner, and brother,” said the occasion was important to him for two reasons.

”First, it is significant to note that this unveiling is the third by our Party. I have had the opportunity of unveiling two Action Plans. I had the privilege of presenting our party’s manifesto of Change in 2014.

”It was a manifesto that signposted our collective desire to arrest the directionless journey our country was headed under the People’s Democratic Party (PDP). The second time was in 2018 when I unveiled the Next Level agenda of our government.

”The second reason this occasion is significant is that we are having our first transition within our party where I am in the last year of my two-term mandate, and we have a new candidate to lead our party into another presidential election.

”The events preceding our presidential primaries and the conduct of the primaries were important milestones in the development of our internal democracy and party politics.

”I must congratulate the leadership of our party, other stakeholders, and the entire party members for the success of the exercise. We can say with confidence, that our party, the All Progressives Congress (APC), is charting a steady course in our journey towards enthroning lasting democratic culture in our body polity.”

The president also thanked party officials in the National Executive Council, the Zonal, State, Senatorial, Local Government, and Ward executives for their unalloyed support to his administration and the great efforts and outstanding commitment to the cause of the party and democracy.

He urged them to be mindful of the importance of building a strong and purposeful political party, recounting that the project of pulling ”Nigeria back from the precipice in 2015 was made possible by putting together a formidable party peopled by many who have made a vow to work for a Nigeria we all can be proud of.”

Buhari charged party members to uphold the supremacy of the party, operating within the guidelines as stipulated in their constitution.

”It is worth reiterating the fact that we are stronger today only because we continue to support the Party.

”For us to develop an enduring democracy in our country, we must first subscribe to the supremacy of our Political Party.

”We must subject ourselves to the rules and learn to operate within the guidelines as stipulated in our Party’s Constitution.”

The president reiterated his congratulations to Asiwaju Tinubu and his running mate, Senator Kashim Shettima, for the victory at the primaries, commending the maturity and sportsmanship of other contestants.

He expressed delight that most of the aspirants transferred their structures, including campaign offices to the party’s candidate after the primaries, adding that that was a demonstration of the commitment of the party leaders and members to the cause of the party and democratic practices.

He challenged party members to see themselves as ”ambassadors of progressive principles and exemplify the best of us in their action and words.”

In his remarks, Tinubu declared:

”I seek to become the next President of the Federal Republic of Nigeria because I know the way. My experience and past performance have shown that it will be through collective effort and national endeavour that we join hands, cross the divides and achieve our vision. I ask you to join Senator Shettima and I on this journey.”

On his Agenda for Renewed Hope for Nigeria, the APC presidential candidate said standing on the foundation emplaced by the current administration, his administration would among other things, build a Nigeria, especially for the youth, where sufficient jobs with decent wages create a better life.

He said his administration would export more and import less in order to earn more foreign exchange and strengthen the naira.

”We will deliver food security and affordability by continuing to prioritise agriculture and assist farmers and other players in the agricultural value chain through the enlightened agricultural policy that promotes productivity and guarantees robust income.

”We will modernise and expand public infrastructure to stimulate economic growth at an optimal rate. Generate, transmit and distribute affordable electricity to give our people the necessary power to drive their businesses and brighten their homes.

”Our national economy will grow, succeed and be respected. We will embolden and support young people and women to participate more in politics and governance, harnessing emerging sectors such as the digital economy, entertainment, tourism, sports to build today, for the Nigeria of tomorrow.”

Tinubu also promised to provide economic opportunities to people living with disability, the poor and vulnerable, saying ”we will build a Nigeria where no parent is compelled to send a child to bed hungry.”

He added that his administration will also make basic healthcare, education, and housing accessible and affordable for all.

On security, Tinubu promised to establish ”a bold and assertive policy that will create a strong yet adaptive national security architecture and action to obliterate terror, kidnapping, banditry, and other crimes from the face of our nation.”

National chairman of the party, Abdullahi Adamu, said the APC was set for self-succession in 2023 presidential and general elections, buoyed by ”the dint of hardwork, perseverance, discipline, good governance and far-reaching policies of the Buhari administration which has pulled back Nigeria from the brink and stabilised the country.”