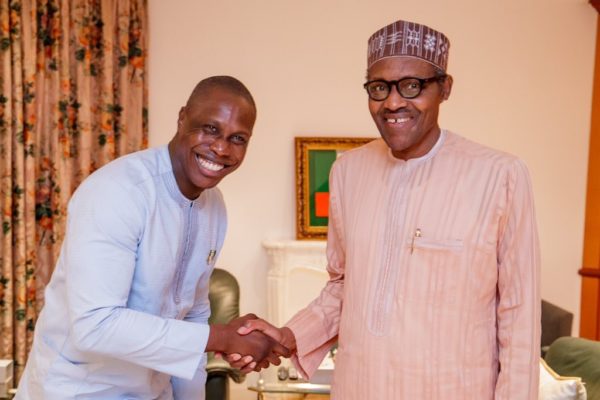 Olujuwon, son of former President Olusegun Obasanjo on Thursday, met with President Muhammadu Buhari at the Presidential Villa, where he pledged his support for the president ahead of the 2019 general election.

The younger Obasanjo’s position contradicts that of his father who is bent on ensuring that Buhari does not stay in office as president beyond 2019.

34 years old, the younger Obasanjo had in a letter in September told the Buhari Campaign Organisation expressed his desire to work for the return of Buhari to office.

“Dear Sir, please find attached a statement of my public declaration and support for the 2019 second term re-election bid of our highly esteemed President Buhari.

“I have taken a personal decision to release the statement and to notify you of my availability to work for the re-election of our dear President Muhammadu Buhari with sincerity and loyalty. Please accept my assurances of the highest regards,” he wrote.

It would be recalled that Chief Olusegun Obasanjo in an open statement early in the year warned Buhari not to stay in office beyond 2019.

He accused the president of deepening poverty in the land and being parochial among other sins.

Obasanjo is solidly behind his former Vice President, Atiku Abubakar of the Peoples Democratic Party, PDP, against Buhari.

He has also been joining forces with other organisations including the Yoruba socio-political group, Afenifere, to ensure that Buhari does not return to office in 2019.