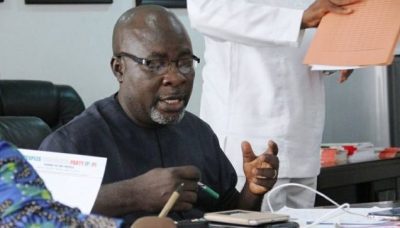 The rejection of Buhari by the people of Nigeria ahead of the 2019 election is based on his “abysmal failure and the deception of his All Progressives Congress (APC) in the last three years.”

This is the position of the leading opposition, Peoples Democratic Party, PDP.

The party made the remark on Wednesday while declaring that its position that President Muhammadu Buhari had become unpopular had been confirmed by The Economist and HSBC.

In a statement issued by its National Publicity Secretary, Mr. Kola Ologbondiyan, on Wednesday, the party said it was sure of defeating Buhari in the 2019 election.

The statement reads in part:  “The party notes that in line with the reports, Nigerians are fed up with President Buhari mainly due to the incompetence and unprecedented corruption in his Presidency, resulting in the ruining of our once robust economy, with attendant mass job loss, ravaging hunger, starvation and disease, as well as escalated insecurity, with documented mass killings, violation of human rights and daily bloodletting in various parts of our country, a development that has put the unity of our great country at risk.

“Moreover, the finding by the two bodies that a second term for President Buhari will worsen our nation’s economic and security woes is a position also held by Nigerians across board, hence their determination to rally on the platform of the repositioned PDP, with our array of very popular Presidential aspirants, to vote him out in 2019.

“The world now knows the major reason the Buhari-led APC administration has resorted to harassment and vicious attacks on the opposition, using trumped-up charges; the various assaults on the institution of the Judiciary and the National Assembly, as well as unrelenting machination to compromise the Independent National Electoral Commission (INEC) to rig the elections.

“This is the reason President Buhari rejected the amendment to the Electoral Act passed by the National Assembly, which practically checks all APC’s rigging strategies ahead of the 2019 general elections and for which Nigerians have approved that the legislators should override his veto.

“The fear of imminent defeat is the reason President Buhari is against the amendment that checked the use of underage voters, provided for online publication of voter register in addition to instant transmission of results from the polling to collation center, thus eliminating interferences and planned alteration of results by the APC.

“Nigerians are already aware that this is why APC and INEC have been conniving to secretly create 30,000 illegal polling units in remote non-descript areas, as well as registration of compromised observers to validate their machinations.

“Now that Mr. President is aware that his approval rating among Nigerians and across the world has hit the rocks despite the many choreographed endorsement stunts by his handlers, the PDP urges him to rein in his lackeys, bury the idea of rigging the elections and get ready to accept an inevitable defeat as Nigerians are not ready to be dragged into an unnecessary political crisis for any person’s selfish ambition.”