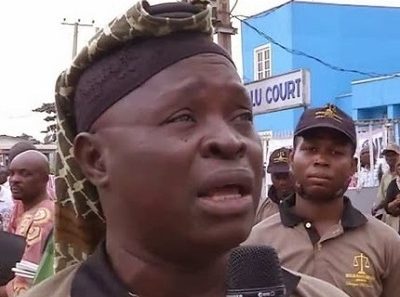 An Islamic rights organisation, Muslim Rights Concern, MURIC, has called on all individuals and organisations involved in terrorist activities to drop their weapons and embrace peace.

This is as it called on powerful nations of the world to review international policies which tend to promote friction among countries.

It said the United Nations must also stand up firmly to enthrone justice, not only between rich and poor nations but also on the Palestinian question.

The position of the group was expressed by its director, Profess Ishaq Akintola, against the backdrop of the World Peace Day.

“We urge terrorist elements to embrace dialogue. Violence is a square peg. Peace is a round hole. Therefore, violence hardly ever leads to peace.

“Finally, we call on powerful nations around the world to review international policies which tend to promote friction among countries of the world. The United Nations must also stand up firmly to enthrone justice not only between rich and poor nations but also on the Palestinian question,” he said.

MURIC also stressed the need for peace in all human relationships and endeavours around Nigeria and across the world.

The group said Nigerians should sustain the current peaceful atmosphere in the country, adding that religious leaders owed it a special duty to sustain government’s peace efforts.

It said Nigerians must stop the blame game.

Said MURIC:  “No religion teaches the killing of fellow human beings. Religious leaders must therefore preach love, tolerance and forgiveness. Christian and Muslim leaders in particular must come closer. In particular, churches and mosques across Nigeria must rise against hate speech. Those worshipping the God of Peace have no alternative than to preach peace and promote social harmony.

“They must not do this in private. This is the time to organize joint workshops, seminars and conferences on peaceful coexistence among adherents of different religions. We need to carry our followers along the path of peace by allowing them to see us sitting, talking, eating and drinking together. This is the time to exchange official visits among the leaders of various religious groups.

“Such visits and programmes should be given adequate publicity in order to build confidence in our followers, douse tension in our communities and for the purpose of dissuading the belligerent elements among us. This attitude should be replicated by leaders of Nigeria’s different ethnic nationalities.”

MURIC also appealed to the Federal Government (FG) to pull more strings in ensuring the freedom of Leah Sharibu and the 54 soldiers.

“We feel the pain of Leah Sharibu. Our hearts go to her parents. We call on the Federal Government to pull more strings in its efforts to set her free.

“In the same vein, we remind FG of the need to set the 54 soldiers free. These men are languishing in jail after exposing the massive corruption in the war against insurgents by refusing to fight without good weapons. It was their action which exposed the grand fraud at the battle front. We call on President Muhammadu Buhari to evoke the prerogative of mercy to grant them presidential pardon.

“We urge politicians not to pursue ‘do or die’ political agenda towards 2019. With special focus on the gubernatorial election in the State of Osun on Saturday 22nd September, 2018, we ask politicians to shun thuggery and hooliganism and to accept the outcome of the elections without bitterness or rancour,” it added.