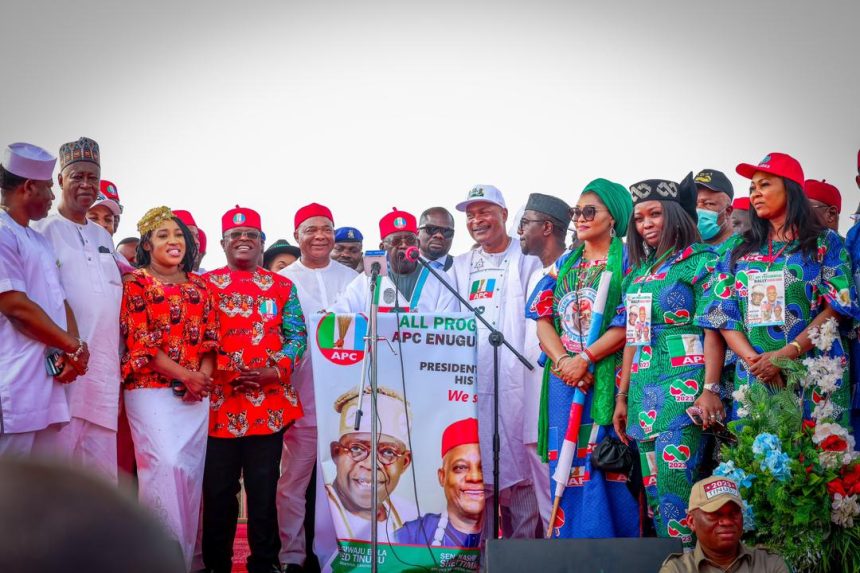 All Progressives Congress, APC, presidential candidate, Asiwaju Bola Ahmed Tinubu, has promised to make Enugu the manufacturing hub of Nigeria, saying the state has what it takes to be the economic powerhouse of the country.

Speaking to party supporters at the presidential campaign rally in the state held at Michael Okpara Square on Wednesday, Tinubu said not only was the state blessed with mineral resources, it had a friendly climate good for national prosperity.

“Nothing will stop us if we are determined to make this state a regional hub of Nigeria’s manufacturing sector,” he said.

Tinubu praised the people of the state for also being very talented and showcasing this wherever they found themselves.

He said: “Enugu is a richly endowed state with some of the most talented and able people you can find anywhere. You have an enlightened and progressive outlook. You are creative and inventive. You are not content with tomorrow being the same as yesterday.

“Incredible mineral resources lay at your very feet. These resources can fuel economic growth and recovery. Enugu has the largest deposits of coal nationwide. We cannot be afraid to put these deposits to use to fuel industries and light homes.

“The climate is sweet here.  The soil is fertile. The state has the potential to be an agrarian powerhouse, producing and exporting an array of cash crops. This will increase our foreign reserves while raising the standard of living with better paying jobs.

“Let us not forget the progress that is the trademark of Enugu regarding the production, assembly and manufacturing of machinery. There is so much potential here. You are a beacon of hope, a lantern shining the way to a greater and better society.”

While urging Nigerians yet to collect their Permanent Voter Cards to do so, saying that was the card that could liberate them and give them renewed hope, Tinubu spoke on his plan for Enugu State if elected president.

He said he would make the state an international export hub, while also making the state which houses one of the oldest football clubs in the country – Enugu Rangers – a tourism destination.

“I dream of an Enugu State where agriculture is flourishing, and national and international exportation is the norm. I envision a state where manufacturing and production are booming. Where domestic and international automobile, heavy machinery and other companies set up assembly plants.

“In this visionary state, tourism will be a major source of income. People will travel far and wide to watch their favourite teams play at the Nnamdi International Azikiwe Stadium, to enjoy a game of golf at the Enugu Golf Club and to visit the National Museum of Unity.

“I dream of an Enugu State where the intelligent, talented and hardworking citizens standing before me today have access to quality education, affordable healthcare, lucrative jobs and real opportunities.

“My industrial master plan encourages domestic manufacturers and producers. My administration will create the right business environment through lower import tariffs on the semi-manufactured inputs needed to increase manufacturing here. We will provide tax credits and reduce interest rate loans for businesses. Youth employment will be increased through employer credits and on-the-job training,” he added.

Just like he said wherever he had visited, the APC candidate vowed to secure the nation and make it possible to go about their daily activities without any fear.

“I am determined to solve insecurity at the state, regional and national levels. Citizens will no longer fear bandits, kidnappers, and terrorists. I will increase our security forces, upgrade tactical communications and transportation, improve our surveillance and protection of critical places and facilities like marketplaces and roads. Those who seek to do harm will be tracked down and will know no rest until they change their violent ways,” he added.

On the agitation for more control of resources and police by states, he added, “States need more authority and resources to spur grassroots democracy and development.

“States must have more of a say regarding law enforcement. State police and other measures will be explored,” he said.

Imo State Governor and South-East Coordinator of Tinubu/Shettima Campaign, Senator Hope Uzodimma, urged Ndigbo to rethink their politics, saying the time had come to frontally confront the challenges of the South-East.

He said the people of the region needed a courageous leader who could take bold decisions and guarantee fairness and justice, adding that Asíwájú Tinubu is such a leader.

“We cannot follow a vehicle that has no tyre. Even when you push it, it’s going nowhere,” he said.

Speaking in the same vein, Ebonyi State Governor Dave Umahi who is also the Coordinator, South for the campaign, said Ndigbo must stand with the man who could win, stating that the people of the zone “should be obedient to APC and Jagaban and no one else.”