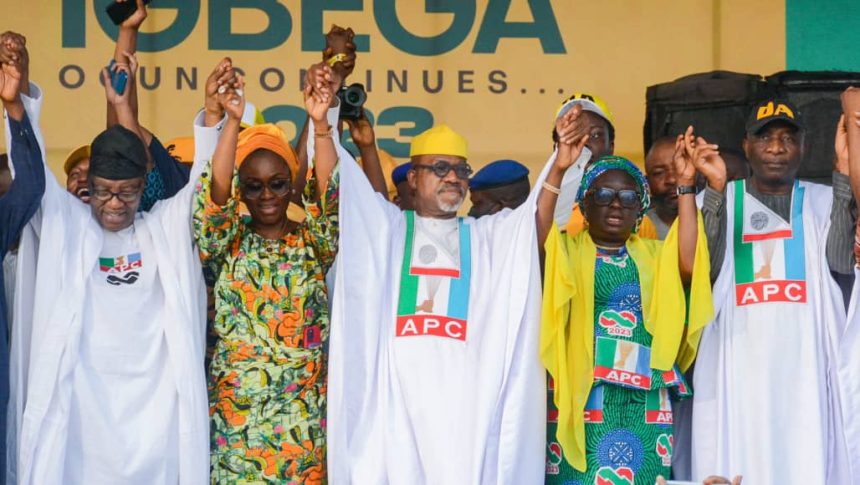 As the February 25 and March 11, 2023 general elections draw near, Ogun State governor, Prince Dapo Abiodun, has pleaded with Nigerians to ensure the election of competent and capable hands into various offices, as against voting mediocres.

Abiodun gave the advice on Thursday during the commissioning of Esure-Imushin Road in Ijebu East local government area of the state, as he continued with his re-election campaign tour.

While speaking at some of the rallies held in his support, Governor Abiodun also noted that his administration’s light-up-the-rural-areas project would soon commence, with the distribution of electricity transformers and solar system.

He assured that  people in the deep rural areas would soon experience a new lease of life with the provision of electricity in their respective communities while adding that the construction of the 2.1 kilometres Esure Road was in keeping with the promises he made in 2021 during the campaign for the local government election.

He noted that the road, apart from linking the first College of Health Technology in the state, would reduce the wear and tear of vehicles plying it.

He called on the people to maintain the road.

“This road is yours. I want to admonish you to take ownership of this road. This road has been built through your commonwealth and taxes. Make sure it is not abused or turned to mechanic workshops,” Abiodun said.

He called on the people to collect their Permanent Voter’s Cards before the January 29 deadline and ensure they elected competent leaders.

He urged Nigerians to vote the presidential candidate of the APC, Bola Tinubu, saying he was the most competent.

He also urged the people of the area to vote the APC senatorial candidate for Ogun East, Otunba Gbenga Daniel and himself to return as governor, among others.

“Without your PVC, you will not be able to vote and you must vote because I am sure you want the continuity of what we are doing here. I plead with you to please collect your cards and vote for us.

“Governance is a serious business. It is not meant for mediocres, but people with proven track records in public and private endeavours,” the governor stated.

In his welcome address, the Commissioner for Works and Infrastructure, Akin Adesanya, said the road was part of the administration’s  inclusive policy to ensure that all parts of the state benefitted from developmental projects.

He said the road which was built to standard, would reduce the stress motorists went through while boosting the economy activities in the area.

Chairman, Ijebu East local government area, Mr. Wale Adedayo, appreciated the governor for reconstructing the road, pleading with him to help in providing access road in Yemoji area as the axis was witnessing increased development.