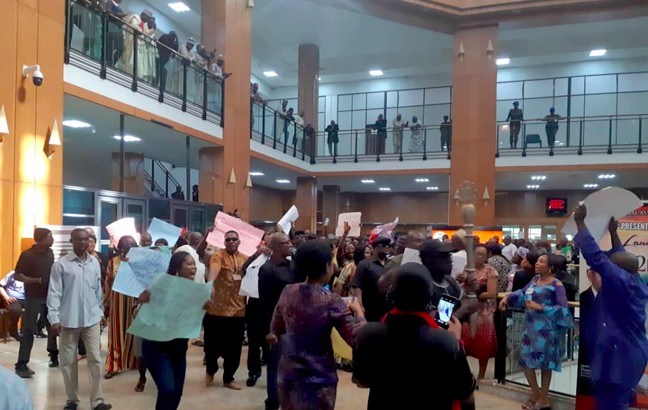 Carrying placards with different inscriptions, the workers crowded the lobby from where the two chambers of the National Assembly could be entered.

Some of the inscriptions called on a probe of the management of the National Assembly.

Some of the legislators were turned back while some simply went into their different offices.

The staff, on Sunday, announced their decision to embark on strike to protest the non-payment of their salaries and allowances.

The first phase of their protest, they said, would be carried out between December 4 and 8.

The decision of the staff was made known in a statement issued in Abuja by the Secretary General of PASAN, Mr. Suleiman Haruna.

He explained that the decision was taken as a result of the nonchalant attitude of the legislators over the matter.

The demand, he said, included the release of “all pending staff promotions.”

They also want the release of conversion letters with arrears fully paid on or before December 31.

He said apart from protest, they would picket to ensure total compliance by all the staff of the National Assembly.

It would be recalled that the staff had staged a protest on October 9 to welcome the legislators from recess.

They demanded that they should be paid their allowances and salaries which had accumulated since the inception of the 8th Assembly.