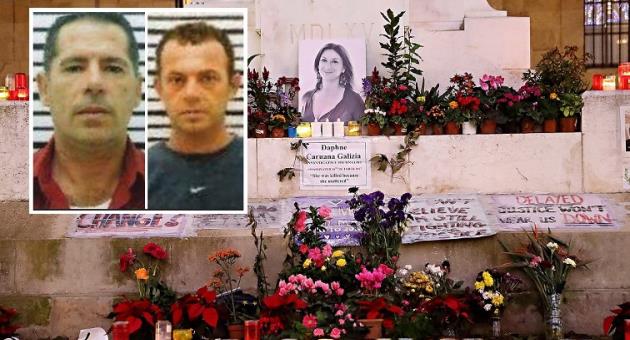 Two brothers accused of murdering Maltese journalist, Daphne Caruana Galizia, were sentenced to 40 years in prison on Friday after they dramatically admitted to the crime hours after their trial began.

The accused, George Degiorgio, 59, and Alfred Degiorgio, 57, pleaded guilty to six major charges, including wilful homicide and detonating an explosive with intent to kill, both of those crimes carries life sentences.

The brothers switched their plea just hours after a nine-person jury had been sworn-in to hear the case, and did so without explanation.

They had previously refused to cooperate with investigators and had spent almost five years behind bars since they were first arrested in December 2017.

Galizia was blown up in her car as she was driving away from her family home in October 2017.

The bomb was placed under the driver’s seat and sent her body parts flying “everywhere, when the bomb exploded”, a court heard.

A third man who was also charged alongside the Degiorgio brothers, Vincent Muscat, pleaded guilty to charges in February 2021, he was given a 15-year prison sentence.

Prosecutors alleged that the trio was hired by a top Maltese businessman, Yorgen Fenech, who had ties to the government of former prime minister Joseph Muscat.

At the time of her murder, Galizia was investigating a data leak of documents related to a project Fenech was a shareholder in, her son has testified.

Fenech, who is coming before the courts separately, denies all charges.

The brothers had unsuccessfully tried to negotiate a pardon in exchange for naming bigger alleged conspirators, including a former minister whose identity hasn’t been revealed.

They also sought to have the trial postponed after their lawyer resigned from the case in August and they were unable to find a replacement.

Alfred Degiorgio went on hunger strike, saying he was being denied fair representation.

However, that attempt failed, and on Friday George Degiorgio launched into a tirade before the court hearing began.

“You know who killed Daphne. Those who were rubbing shoulders with you,” he told prosecutors.

“The courts are corrupt. Corrupt judges too… perhaps we’ll meet in hell.”