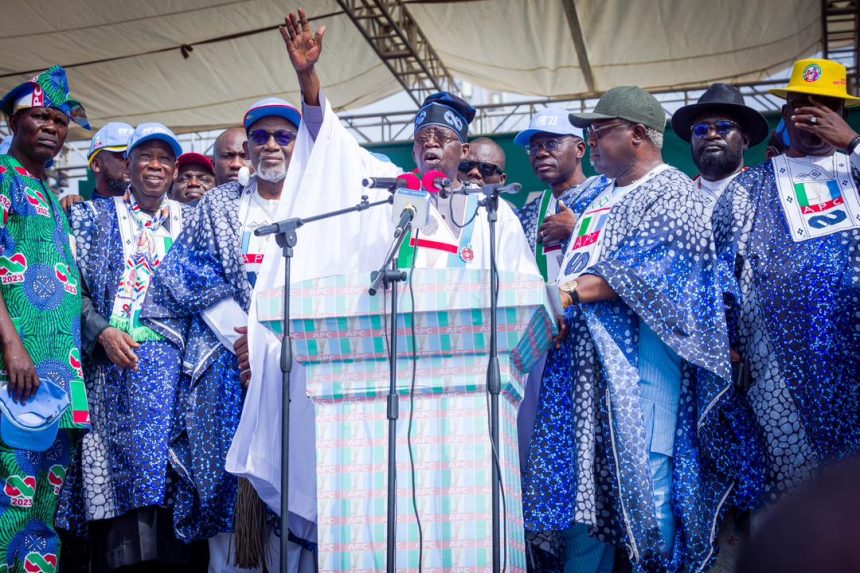 All Progressives Congress, APC, presidential candidate, Asíwájú Bola Tinubu, has hailed the people of Ondo State, saying they have always been a champion of people-oriented and progressive government.

Addressing the state rally on Saturday at Democracy Park, Akure, the state capital, he urged the people of the state to live up to that billing by voting APC all the way in the upcoming election.

The APC candidate said: “On February 25, I know you will be a champion of progressive politics again. That date represents for the nation and for each and every one of us an appointment with destiny.

“We not only must make that appointment, we must emerge from the appointment fully dedicated to creating a more prosperous, safer, tolerant and dynamic society.

“But these things do not come by accident. These things are but some of the fruits that only progressive and democratic good governance can harvest.

“And that progressive governance can only be brought to you by someone who has governed in a progressive manner before.”

Taking a swipe at Atiku, Asíwájú Tinubu said the PDP candidate could not do it.

“He doesn’t want to do the brave and hard work required to build a better nation. Instead, he would rather sell your birthright to the highest bidder and run off with the proceeds.

“He cares little that his policies and actions will impoverish you and leave you with nothing.”

On the Labour Party candidate, Tinubu said Obi had a chance to show how progressive he could be when he was governor of Anambra State.

“All he could do was boast that he saved money. But I tell you it is a wicked parent that holds money in his hand yet allows his children to starve.

“Likewise, it is a heartless governor who holds back money when people went hungry, schools, road and clinics went into disrepair. Neither the city-dweller nor farmer prospered under him.

“In the end, he refused to save the people because he preferred to save the money. And he claims to be the party of labour. You will have to be labouring under a terrible delusion if you think he will do better for the nation than he did for Anambra State. Buyer beware of salesmen selling fake merchandise.

“The truth of the difference between my leadership and that of Mr. Obi lies in one observation. Although Lagos is crowded and Anambra has ample space, more people left Obi’s Anambra seeking a better life in Tinubu’s Lagos than left Lagos believing Obi had established a blueprint for growth in Anambra.

“My people, you cannot entrust your future or that of our nation to Mr. Sell Everything Atiku or Mr. Stingy Obi. But you can trust Mr. Progressive Good Governance Tinubu! ”

Speaking on his agenda for Ondo State, Tinubu noted that the history of Ondo is one where industrious farmers had for years sowed prosperity through well-cultivated cocoa plantations and other agricultural exploits.

He said his agricultural  policies would return the farmer back to his esteemed and essential place in society.

“You have been the backbone of the economy and bedrock of the community. You will be honoured as such.”

He re-stated that his government would re-establish commodity exchange boards to ensure farmers a guaranteed price for their yields.

If given the mandate to lead this country, he said his administration would help the state to reap the full benefits of her bounteous resources.

“For example, my agricultural plan also calls for the creation of agricultural hubs in the nation. You will be the direct beneficiary of this policy. These hubs will increase  cultivation of now idle fertile land yet also promote agro-processing businesses that will produce many new jobs and put more money in the pockets of the average person and small farmer,” he said.

Tinubu added: “Our economic plan will make strategic investments in industry and infrastructure, giving our talented people the chance to make a good living while producing valuable goods that will improve the quality of life for those who buy them.

“Your natural resources will  be more comprehensively utilized. Your oil and gas must bring prosperity, development and jobs.

“But that is not all.  Bitumen, granite and marble must be mined and turned into finished products right here in the state under my administration.”

Ondo State Governor Akeredolu said the people of the state being progressives had resolved to totally back Asíwájú Tinubu, adding “we will show who we are on February 25, 2023.”

Senator Omisore thanked Governor Akeredolu and the people of the state for their demonstration of support for APC and Tinubu.