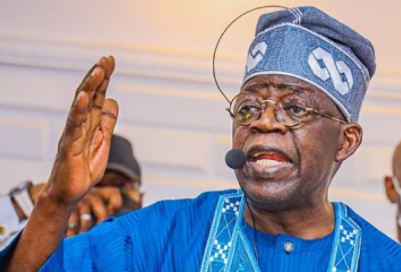 Presidential candidate of the All Progressives Congress, APC, Asiwaju Bola Ahmed Tinubu, on Friday in Lagos unfolded his comprehensive economic plan before the organised private sector under the aegis of the Nigerian Economic Summit Group, NESG.

The interaction, which was another opportunity for Tinubu to present his plans to another group of stakeholders just as he has been doing in various town hall meetings across the country, saw him itemise his administration’s path to economic recovery if elected in next month’s presidential election.

He noted that before economic recovery could be achieved the nation must be secured, stating that, “First, to achieve the economy we seek, we must resolve the pressing security issues. No nation can flourish with terrorists and kidnappers in their midst.”

The dialogue again gave him an opportunity to emphasise the importance of the private sector and his administration’s readiness to partner them.

He added that his administration would immediately after getting to office, urgently address fiscal, monetary, and trade reforms to effectively increase domestic production, thus serving to curb imported inflation, and to ensure better macro-economic stability by accelerating inclusive growth and job creation across Nigeria.

To achieve this, he listed principles that will guide their plans and policies.

The principles include how to tackle inflation, petrol subsidy and monetary policy.

“I do not hold to the mainstream view that all forms of inflation are best tackled by interest rate hikes and shrinking the economy. Supply induced inflation does not lend itself to this harsh medicine, just as one does not cure a headache by plucking out one’s eye.

“I do not embrace the conventional wisdom that fiscal deficits by the national government are inherently bad. All governments, especially in this era of fiat currency, run secular budget deficits. This is an inherent part of modern governance. The most powerful and wealthiest governments run deficits, as do the poorest nations.

“A budget deficit is not necessarily bad. Look at the Japanese example with high government borrowing and low inflation. The real issue is whether deficit spending is productive or not. Unproductive deficit spending is a compound negative. Especially if backed by excessive borrowing of foreign currency. This is not classroom economics but it is the lesson of the real economic history of nations.

“It is based on this idea that I believe we must remove the PMS subsidy immediately. It has outlived its shelf life as a public good. We will neither subsidize neighbouring countries’ fuel consumption nor allow a select few to reap windfall profits and hoard products.

“And the subsidy money will not be ‘saved’ because that means elimination from the economy. Instead, we will redirect the funds into public infrastructure, transportation, affordable housing, education and health, and strengthen the social safety net for the poorest of the poor, thus averting increased security challenges.

“Fiscal policy will be the main driver. Monetary policy is weaker and a less effective instrument. Bad monetary policy is, of course, destructive. But even good monetary policy cannot carry the load the fiscal arm can.  Thus, we must steadily remove ourselves from the fiction of tying our budgets to dollar denominated oil revenues.

He said his administration’s budgeting would be based on the projected spending levels needed to push real annual growth rate above 10 per cent, while reducing the unemployment rate, so that the economy can be doubled in seven years.

He added that to cater for the economic needs of the over 200 million Nigerians, his administration would expand the manufacturing base to provide jobs, and also create affordable goods and products for the population.

He added, “For our industries to thrive, they need inputs, many of which are agriculture based. The present Administration has invested heavily in agriculture, providing loans and expanding the country’s total area of cultivated land for crops, livestock and fisheries.  We will also promote vibrant commodity exchanges that will guarantee minimal pricing for produce.

“We will build on this, with a focus on using technology and expertise to accelerate growth in yields. We will deliver the critical infrastructure necessary to achieve the commodity transformations and agribusinesses to plug seamlessly into higher, more lucrative, entry points in regional and global value chains.

“Building on this foundation, we will accelerate the faithful implementation of the “Infrastructure Master Plan” by adopting proven financing structures till we deliver an acceptable stock of hard infrastructure through seaports and airports; and road, rail and water transportation linkages that can support our desired economic growth.

“Fixing the perennial problem of energy supply is a top priority.  There is no version of the world where Nigeria’s ambitions for itself can be achieved without solving the problem of how to provide energy to homes and businesses across the country.

“What we need to do, going forward, is to improve the enabling environment, further decentralize transmission, and deliver cost reflective tariffs to attract more private investments in the sector.”

The former Lagos State governor said restrictions were placed on import and foreign exchange to promote industrialisation, it has instead smuggling, reduced revenues, impoverished consumers, and raised production costs for firms.

To solve this, he said his administration would improve transparency, moving toward a unified exchange rate.

According to him, by relaxing stifling trade and capital control policies, domestic and foreign investors would be encouraged to invest more in the economy.

“Thus, unification of the Naira exchange, and the transparency it creates, will be a top priority of this Administration when elected,” Tinubu added.

On the major issue of unemployment in the country, Tinubu promised to focus on the creative sector, which has an opportunity to provide millions of jobs annually.

He said, “Taking the creative sector as one example of a sector that already engages millions of our youth, the sector has significant untapped potential for generating quality jobs and foreign exchange earnings for our country.

“From music to movies to fashion, when elected, our administration will create a legal environment that can attract much-needed private investment into the sector, eliminate widespread piracy and copyrights issues, as well as support the development of quality hard infrastructure needs.”

Tinubu also added: “We will work to ensure all borrowing is geared toward productive economic activity, focusing on internal debt discipline.

“Policy options to boost non-oil revenues are key to our revenue mobilization strategy. The use of technology to drive reforms implementation is crucial.

“Despite the adoption of the Petroleum Industry Act 2021, government revenue from oil has continued to decline.  We shall work in a coordinated manner to implement reforms that will remove the bottlenecks to the PIA implementation and attract increased inflows of investment into the sector, address issues of oil theft and vandalization of oil infrastructure, and promote an increase in oil production to tap into the current high oil prices.”

Fielding questions after his presentation and responding to what he would do within his first 100 days if elected, Tinubu said he would hit the ground running by selecting a team of technocrats that will help him run the country as he did when he was governor, stating that building a good team is important.

The APC candidate was accompanied to the NESG session by Governors Atiku Bagudu (Kebbi); Nasir el-Rufai (Kaduna); Babajide Sanwo-olu (Lagos) and Dave Umahi (Ebonyi) as well as former governors Adams Oshiomhole, Kayode Fayemi (Ekiti) and Babatunde Raji Fashola who is Minister of Works, among others.

Tinubu was the first among the top candidates to appear at the presidential dialogue on the Nigerian economy put together by the NESG.

Welcoming guests to the dialogue, the chairman of the summit group, Mr. Niyi Yusuf, said the dialogue was to give effect to a common and shared ideas on the economy between the group and critical stakeholders.

He said NESG was set up to promote and champion the reform of the Nigerian economy into an open globally competitive economy.