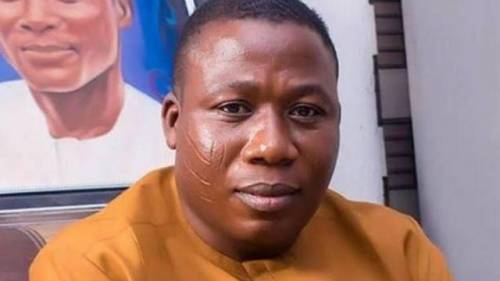 A group fighting for the actualisation of Yoruba Nation, Ilana Omo Oodua, has berated the Department of State Services, DSS, over the claim that it had commenced the extradition process on Chief Sunday Adeyemo (a.k.a. Sunday Igboho) who is currently in detention in Republic of Benin.

The group said the claim by the  DSS was an attempt to evade the cost awarded against it by an Ibadan High Court for unlawful invasion of Igboho’s residence.

It would be recalled that the DSS on Tuesday, disclosed that the process of extraditing the Yoruba Nation agitator, Sunday Igboho to Nigeria was ongoing.

Igboho was arrested by the operatives of the Brigade Criminelle on July 19, 2021, while trying to travel through Benin Republic airport after the raid of his Ibadan residence on July 1, by the DSS operatives.

The spokesman of the group, Mr. Maxwell Adeleye, while speaking in Ibadan on Wednesday, during the inauguration of Ilana Omo Oodua Worldwide Elders Advisory Council, said Nigerian government had not filed any extradition charge against Igboho, but just a ploy to evade damages and cost awarded against them by the court.

He said, “They don’t want to pay the fine and that is why they wanted to quash the judgement.  Also, the appeal for stay of execution that was filed by DSS has not been granted by the court.”

The leader of the Ilana Omo Oodua, Prof. Banji Akintoye, while speaking at the event, said the Advisory Council became important to liaise with traditional rulers and other stakeholders towards making the dream of the self could not drive the course alone.

He urged everybody that loved development of Yoruba land to join hands towards its success.

The Chairman of the Elders Advisory Council, Alhaji Ali Oyedeji, in his remarks, assured that members would collectively engage critical stakeholders in Yorubaland to key into the Yoruba redemption agenda for its peaceful approach toward its realisation.

He however said the recent attempt by some people occupying strategic positions in the group at blackmailing the leadership of the organisation was dead on arrival.

At the inauguration of Ilana Omo Oodua Worldwide Elders Advisory Council, the representatives of various Yoruba groups in attendance passed vote of confidence on the leadership of Prof Akintoye as the leader of Yoruba group championing the actualisation of Yoruba Nation.