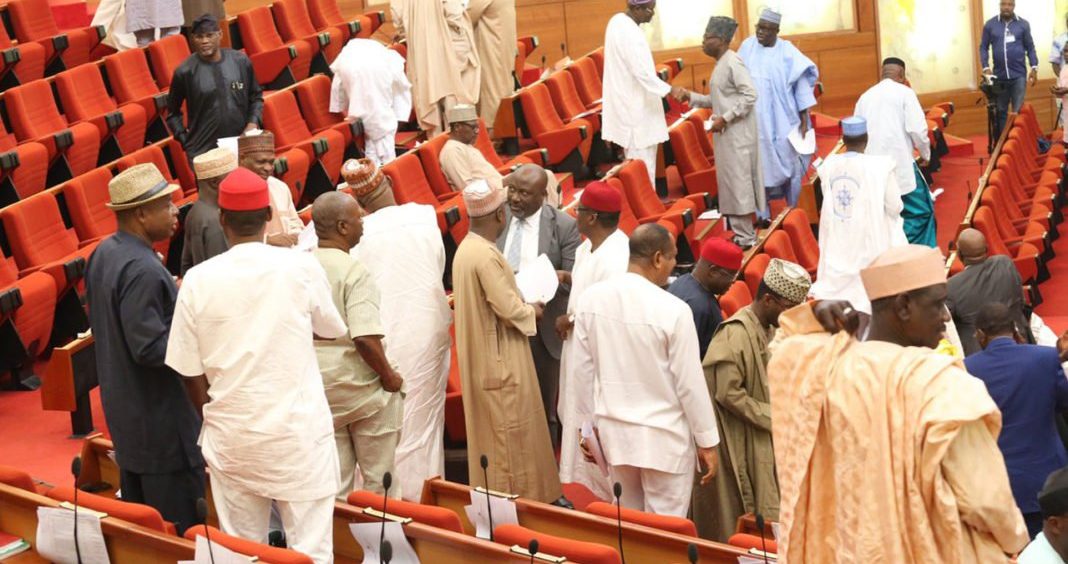 Following a rowdy session inspired by complaints of lopsidedness, the Senate on Tuesday stepped down the confirmation of four nominees for the membership of the Board of the Economic and Financial Crimes Commission, EFCC.

The confirmation of the chairman and members of the Board of the Independent Corrupt Practices and other related offences Commission (ICPC) commission was also stepped down.

The nominations were made by President Muhammadu Buhari and traditionally forwarded to the National Assembly for approval.

After the screening of the nominees carried out by the Senate Committee on Anti-corruption and Financial Crimes, a report was presented at the plenary by its chairman, Chukwuma Utazi (PDP-Enugu North), where they were all confirmed to be qualified for the job.

The chairman, however, pointed out that the nominations were deficient because they did not reflect the Federal Character principle.

According to him, South-East and South-South geopolitical zones of the country were not reflected in it.

His words:  “The committee observed that three out of the four nominees were from the North Central, North-East and North-West geopolitical zones, with only one nominee from the southern part of the country, that is South-West.

“The committee notes that this is not in strict compliance with the Federal Character Principle as provided for in section 14 (3) of the Constitution of the Federal Republic of Nigeria.

“The committee makes this observation to guide the Executive in future nominations.”

Sen. Victor Umeh (APGA-Anambra Central), raised opposition to the nomination based on the fact that it was one-sided.

He said the nomination should be returned to the president for correction.

According to him, with the chairman of the EFCC and secretary having come from the North, it was wrong for the nomination of members to be restricted to the North East and South West.

“Mr President, we have continued to say this that there is need to accommodate all parts of Nigeria in activities of government, particularly in appointing people into agencies of government.

“That has been the practice in this chamber, and on this issue of fight against corruption, the EFCC is a very important commission because the fight involves all parts of Nigeria.

“People are investigated in all parts of Nigerian and the commission cannot fight corruption to the satisfaction of all Nigerians if some parts of the country are not represented in it.”

His position was immediately supported by Sen. Mathew Urighide (PDP-Edo-South).

Urighide insisted that Federal Character had to be reflected in the nominations.

The session soon went rowdy as the legislators were sharply divided on the issue.

They went into a closed door session thus bringing the rowdy session to a halt.

The Senate President Bukola Saraki later announced the stepping down of the confirmation.

He said it to enable them carry out other duties at the session.