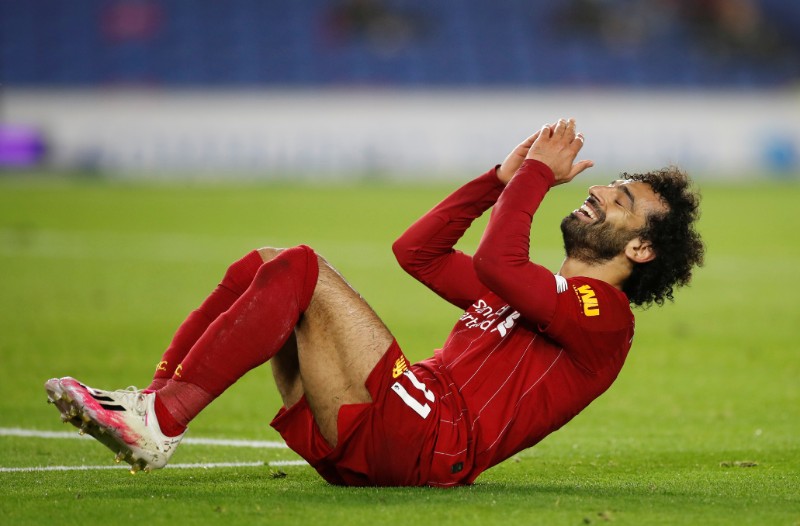 Liverpool handed Manchester City their first English Premier League, EPL, defeat of the season on Sunday, thanks to a Mohamed Salah strike in an enthralling encounter at Anfield.

The Egyptian raced onto a long pass from Alisson with 14 minutes remaining before slotting past Ederson to give the Reds just their third league win of the season.

Manchester City were frustrated to see Phil Foden’s second half goal ruled out following a VAR check for a foul by Erling Haaland in the build-up.

The result leaves Pep Guardiola’s men four points behind league leaders Arsenal, while Liverpool move up to eighth after a much-improved showing.

A high-octane start to the game did not lead to many early chances, with Ilkay Gündogan forcing the first save from either goalkeeper in the 15th minute.

But his hopeful strike from 25 metres was easy for Alisson to deal with.

Liverpool’s first opportunity came through Diogo Jota, who could only place his header from a cross by Harvey Elliott straight at Ederson.

Later on, Andrew Robertson received the ball on the left of the penalty area after Ederson had palmed away a James Milner cross.

But the Scot fired his effort over the crossbar.

Bernardo Silva sliced a shot into the Kop from the edge of the box on the half-hour mark.

Haaland tested Alisson on two occasions, and also saw a header looping over the bar.

The hosts should have been ahead shortly after the restart when Salah was played through on goal by Elliott.

But Ederson got the slightest touch to it to tip the Egyptian’s finish just wide of the right-hand post.

Manchester City thought they were ahead moments later when Haaland burst through, forcing a save from Alisson before Foden put the ball in the net on the rebound.

But referee Anthony Taylor ruled it out after the VAR asked him to check the monitor, with Haaland having fouled Fabinho in the build-up.

It was Liverpool who took the lead on 76 minutes when Alisson caught a Kevin De Bruyne free-kick before launching it downfield to Salah.

The Egyptian outfoxed Joao Cancelo before finishing calmly past Ederson.

Reds manager Jürgen Klopp was sent to the stands by Taylor late on after reacting furiously to the referee’s refusal to award his team a free-kick.

But it did not matter as Liverpool held on for a win that could turn around their slow start to the campaign.