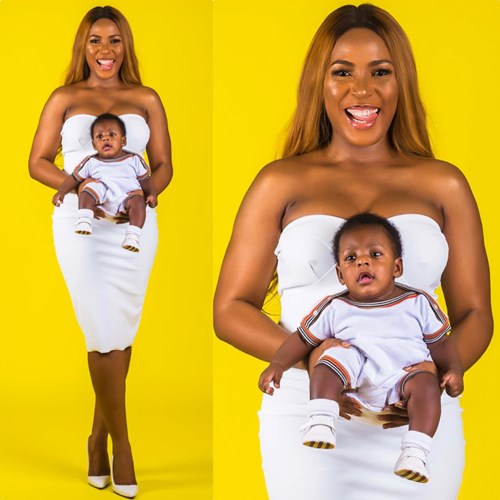 Nigeria’s popular blogger, Linda Ikeji, has called it quit with Sholaye Jeremi, the father of her baby, Jayce.

Ikeji made this public on her blog, stating that they were just incompatible and went their different ways shortly after she got pregnant.

“I thought God sent him as my life partner but I guess he just used him as a vessel for my greatest blessing. Now his part in my story is over. This one is done and dusted,” she said.

It would be recalled that Ikeji was delivered of her baby boy on September 17, 2018 in Atlanta, Georgia with very little known about the father of the baby.

The father was later identified as Jeremi, but that was almost all about everything known about their relationship.

However, detailing the challenges she had faced in the relationship, the 37 years old Ikeji declared that they had gone their different ways.

According to her, God had only used Jeremi whom she met in 2015 as the vessel through which she got her greatest gift.

Her words:  “By mid-2017, we were both still single and we started seeing each other again quietly. There were times it was very intense and we talked about a future together, and there were times that I couldn’t figure out what exactly I was doing with this guy.

“We were not suited for each other. Totally different lifestyles and there was the problem of my fame so I walked away from this man a million times and he came after me a million and one times.

She explained further:  “We went from talking about the pregnancy and being okay with it, to literally not talking to each other anymore.

“When I was about three months pregnant, he did come to see my parents and actually became very cool with my dad. They were literally exchanging Whatsapp messages every day.

“He later agreed to a traditional wedding which he didn’t follow through and then he switched. He began to treat me with so much hate and aggression that I and my family had to cut him off completely.

“To be honest if anybody had told me when we met three years ago, considering how deeply we cared for each other that I would fall pregnant two years later and he would completely turn his back on me for most part of my pregnancy, I never would have believed it but that’s what happened.”