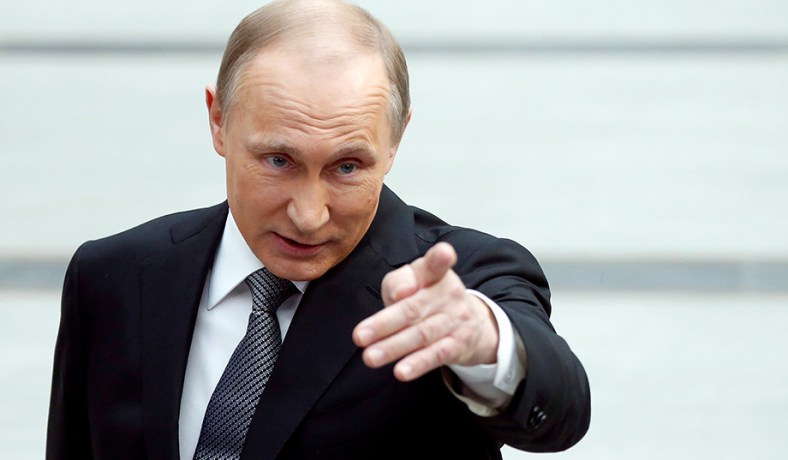 Russian President Vladimir Putin has declared four Ukrainian provinces to be part of the Russian Federation as he signed a document to formally annex the regions occupied by Moscow’s troops.

The Russian president urged Kiev to recognize the annexation of the regions of Luhansk, Donetsk, Zaporizhzhya and Kherson, conducted after referendums a week ago that Moscow said showed an overwhelming majority in favour of leaving Ukraine and joining Russia.

Kiev and Western powers denounced the five-day vote, which ended on Tuesday, saying the results were a foregone conclusion that would never be recognised internationally.

There were reports of residents being coerced into voting, sometimes at gunpoint.

As expected, Russia vetoed a resolution in the UN Security Council condemning the Russian annexation as a violation of international law.

Ten countries voted in favour of the US-Albania-sponsored document in New York on Friday which also called on Russia to immediately withdraw from Ukraine.

Four countries in the most powerful UN body with a total of 15 members abstained.

These were China, India, Brazil, and Gabon.

Russia’s UN ambassador Vassily Nebenzia criticised the vote on the draft resolution as a provocation and an openly hostile act.

Putin urged Ukraine to come to the negotiating table, in a bid to end the fighting that began when Russia invaded Ukraine in February.

Ukrainian President Volodymyr Zelensky, however, ruled out negotiations with Putin.

He said Ukraine was ready for dialogue with Russia, but only under a different Russian president.

He also said his country was applying for an “accelerated” accession to NATO.

“De facto, we have already started our path to NATO. Today, Ukraine is applying to make it de jure (legal),” Zelensky said in a video published on Telegram.

NATO Secretary General Jens Stoltenberg said a membership “remains open” to the country and that the alliance supports “Ukraine’s rights to choose its own path to decide what kind of security arrangements it wants to be part of.”

However, he stressed the unanimity required among members for new applicants to join the alliance.

As the terms of NATO’s founding treaty considers an attack on one NATO ally an attack against all members – it is viewed as unlikely that the Western military alliance would allow a country at war like Ukraine to join the alliance.

After Putin’s speech, the European Union has vowed to never recognize the “illegal annexation” of the Ukrainian provinces.

“Russia is putting global security at risk,” read a joint statement from the 27 EU member states, calling on states and international organisations to reject the annexation.

“These decisions are null and void and cannot produce any legal effect whatsoever. Crimea, Kherson, Zaporizhzhya, Donetsk and Luhansk are Ukraine,” the statement reads.

Top representatives of the Organization for Security and Co-operation in Europe, OSCE, have condemned Moscow’s moves to annex Ukrainian territories as “illegal” and “unacceptable.”

The organization, of which Russia is a member, once again called on Moscow “to withdraw all its forces from across Ukraine.”

Stoltenberg, meanwhile, said this is “the largest attempted annexation of European territory by force since World War II” and that the alliance and its allies “will not, recognise any of this territory as part of Russia.”

Stoltenberg stressed that the move “represents the most serious escalation since the start of the war.”

The U.S. announced it is imposing further sanctions on Russia, with measures targeting among others, further Russian government representatives, their family members and members of the military.

Networks for the procurement of defence equipment, including international suppliers, are also affected.

The areas annexed by Moscow have been occupied since soon after the start of Russian invasion.

Putin said last week that Moscow would see Ukrainian attacks on the annexed regions as attacks on Russia itself and would use all means to defend them – a thinly veiled reference to nuclear weapons.

Together with Crimea, nearly 20 per cent of Ukraine’s territory is under Russian control, although Kiev has reclaimed some of the occupied territory in recent weeks.

But the Kremlin said on Friday that speculation it would resort to nuclear weapons are only designed to spread fear.

Despite the annexation, Kiev’s forces are making gains, with some of the recent fighting focused on Lyman, a small, strategically important town in Donetsk.

At least 23 people were dead after a rocket attack on a convoy of civilian vehicles near the Ukrainian city of Zaporizhzhya, with another 28 injured, according to the regional governor.

Zelensky lashed out at the attack, calling it Russian retribution for the unbroken Ukrainian resistance to its failed invasion.

“Only absolute terrorists operate this way, the kind of people for whom there is no place in the civilised world,” he wrote in the wake of the attack.

“Peaceful Ukrainians are being wiped out cynically because he long ago lost all of his humanity.”

However, the head of the Russian occupation authorities, Vladimir Rogov, wrote on Telegram that Ukrainian troops had fired the shot.

He also put the death toll at 23, but said there were 34 injured.