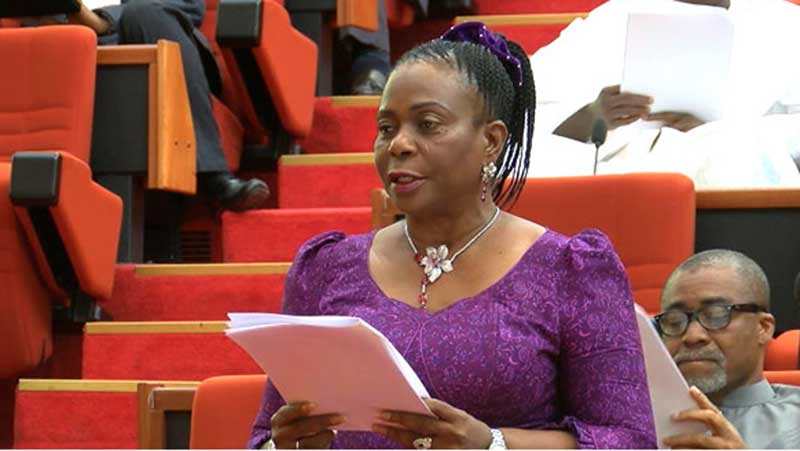 The Senate has declared as untrue, the claim by President Muhammadu Buhari that the National Assembly was responsible for budget delay.

It said contrary to the recent statement attributed to the president, the refusal of ministers and heads of agencies to defend the budget proposals of their ministries and agencies before legislative committees was responsible for the delay in passage of the document.

The declaration was made by the Senate Minority Leader, Senator Biodun Olujimi in a statement issued on Sunday.

She said blaming the National Assembly for budget delay was unfortunate and amounted to playing politics with sensitive issues like the budgeting process.

The statement reads in part:  “The President himself in June this year expressed surprise during a meeting with the leadership of the National Assembly when he was confronted with the fact that ministers and heads of other agencies have refused to defend the budget proposals of their ministries and agencies before legislative committees.

“On that occasion, the President stated that the information was contrary to what he was fed by his aides before coming for the meeting. He then ordered the Secretary to the Government of the Federation (SGF), to compel all heads of MDAs to immediately appear before the respective committees so that the budget can be passed.

“It is a well known fact that some ministers had in the past appeared before the National Assembly committees and denied certain provisions in the budget of their Ministries. In one instance, Information Minister, Lai Mohammed, denied the provision made for the purchase of computers in his ministry as stated in the budget proposal submitted to the National Assembly. This kind of disconnect between budget proposals and the position of the heads of MDAs made the National Assembly to insist on budget defence by heads of MDAs. This has helped to curb the menace of what is known as budget padding.

“The executive arm needs to further interrogate the efficiency of those involved in budget preparation so that it can realise that one of the causes of delays in budget passage is how the budget estimates submitted to the Legislature come without the necessary details and accompanying documents. What was usually laid before the parliament was mere window dressing documents for the purpose of the presentation ceremony and the photo opportunities.

“All these developments will necessarily lead to delay in the passage of the budget. The National Assembly, in the spirit of co-operation, decided to keep quiet and demonstrated understanding with the executive. Yet, in order to undermine the legislature and incite the people against the institution, the executive will often go to the public to talk ill of the legislature and blame us for its own failure.

“When the President of the Senate told Senate Correspondents at their annual retreat in Jos that there was need for more engagement, dialogue and discussion between the executive and the legislature for the smooth running of governance, key members of the executive publicly condemned the call. We are surprised that the Presidency has now realised the need for constant meetings with legislators when the wave of defection begins to blow around.

“It should be noted that just as the Presidency needs to engage legislators for partisan issues, the same approach is more needed on the issues of governance, smooth operation of the principle of separation of powers and checks and balances. When the executive runs down the legislature, it does nobody any good.”