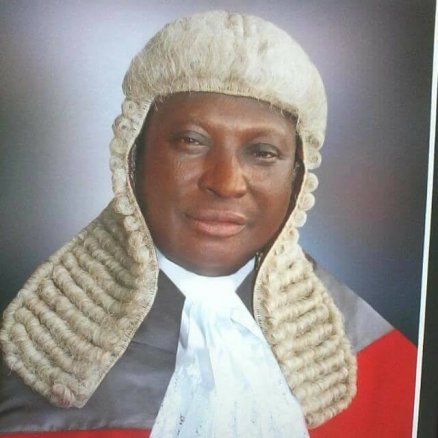 At the valedictory court session in his honour at the state’s High Court Ibadan, the Commissioner for Justice, Prof. Oyelowo Oyewo, said Abimbola played a multi-dimensional role.

Oyewo, who praised him for his hardworking, firmness and immense contribution to effective administration of justice, also prayed that the rest of his life might be the best.

The NBA National President, Mr Yakubu Maikyau (SAN), represented by Mr Seun Abimbola, SAN, said Abimbola left an indelible mark in the judiciary across the federation and not only in Oyo State.

He commended the retiree for effective administration of Criminal Justice Law in the state.

“The retiring CJ among many other achievements, scored very high in the setting of Oyo State Multi-Door Court house; by this he demonstrated that justice dispensation is indeed the primary role of the judiciary.

“Also, it was during his tenure that family court was established in the state which boosted public confidence in the judiciary,” he said.

The first female SAN in Nigeria, Mrs Folake Solanke, congratulated the retiring CJ for safe landing after a hectic but successful service.

Gov. Seyi Makinde of Oyo State described Abimbola as his good teacher and solid adviser who worked in good synergy with his administration.

Makinde promised that his administration would continue to prioritise the welfare of the judiciary and make their jobs easier.

“We thank God that the CJ is ending well today. Thank God for the work God used you to do in Oyo State entirely and not only in judiciary,” Makinde said.

Responding, the retiring CJ remarked that he maintained peace in the judiciary and had peace with all while his judgments were subject of international discourse.

Abimbola, who stressed that for one to go far in life, one must work in synergy with others, added that he wouldn’t have gone so far in life without the sacrifices of others.

He thanked God for the opportunity given to him to be the CJ, the Chief Justice of Nigeria, Justice Oluwakayode Ariwoola for his mentorship and support and also Governor Makinde for giving him all necessary supports.

“I also thank immensely my family, friends, colleagues, staff and well wishers for always being there for me.

“I’m happy and proud for the past and exceedingly hopeful for the future,” he said.

On behalf of the family, the CJ’s son, Mr Ademola Abimbola, said “today is a remarkable day to the Abimbola’s family as our father retired without being tired.”

He became a judge in the state in 1997, rose to the office of the chief judge in 2015 and served as the Oyo State Chief Judge for eight years.

The programme was supposed to come up on Saturday, being the retiring CJ’s 65th birthday but was brought forward to Friday, a working day.

Among the dignitaries was the Chief Justice of Nigeria, Justice Oluwakayode Ariwoola, Abimbola’s family and friends.