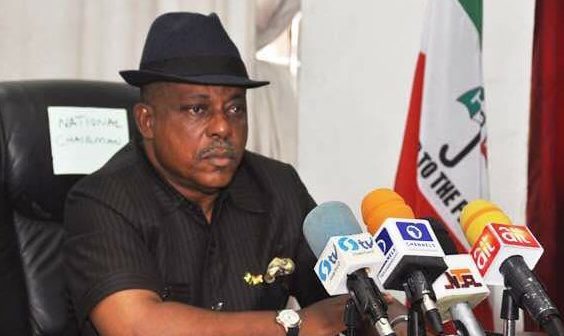 For his role in the alleged malpractices in the Saturday Osun State governorship election, the Peoples Democratic Party, PDP, has called for the resignation of the Chairman of the Independent National Electoral Commission, Professor Mahmood Yakubu.

The PDP made the call on Tuesday, saying it had lost confidence in his leadership of the electoral body.

She was said to be in charge of Information Communication Technology (ICT) Department of INEC where election results were allegedly altered to favour the All Progressives Congress, APC.

In a statement issued by its National Publicity Secretary,  Mr. Kola Ologbondiyan, the party described as totally  inexcusable that Prof. Yakubu presided over the election that was characterized by fraud.

The party said it had additional documentary evidence of how INEC, through its Operations and ICT Department, allegedly doctored results from polling centres, directly shortchanged the PDP with no fewer than 4,387 votes by slashing votes cast for the PDP at the polling centres while allocating fictitious figures to the APC.

It added that it had facts on how INEC slashed over 1000 votes freely cast by the people for its candidate, Senator Ademola Adeleke, in Ayedaade Local Government Area, just to reduce PDP votes from the legitimate 10,836 votes cast at the polling centres to 9,836 votes so as to give APC the lead with a 1000 vote margin in the local government.

The party claimed too that it had evidence of how INEC, while collating results, directly allocated over 1,367 fictitious votes to the APC in Olorunda Local Government Area, to fraudulently shore up the APC votes to duplicitous 16,254 votes.

“This is in addition to evidence of how INEC awarded over 2,000 fictitious votes in favour of the APC in Oshogbo to push APC’s vote to 23,379 against the actual 21,479 votes scored by the defeated party.

“Such writing of results by INEC in collusion with the APC occurred in many other areas leading to INEC’s ill-fated directives to its junior officials, including the one apprehended in Ayedaade, to destroy results already displayed at polling and collation centres.

“It was after INEC and the APC realised that despite their manipulation of figures, our candidate still scored the highest number of votes, making him the clear winner of the election, that they decided to fraudulently apply unconstitutional grounds to declare the election inconclusive.

“From the facts available to us, INEC robbed our party of over 4,387 votes. Our actual winning margin stands at 4,740 votes against the 353 votes declared by INEC,” the party said.

“While Prof. Mahmood Yakubu can no longer be trusted to conduct the 2019 general elections, it is public knowledge that Mrs. Amina Zakari, the INEC National Commissioner, Supervising Electoral Operations is a direct blood relation of Mr. President and as such, we believe that she cannot be an impartial arbiter in an election involving her uncle.

“The PDP therefore calls on all patriotic Nigerians to join in the demand for the resignation of Prof. Yakubu and Mrs. Zakari so as to avert this dangerous path, where INEC is leading our nation,” PDP declared.