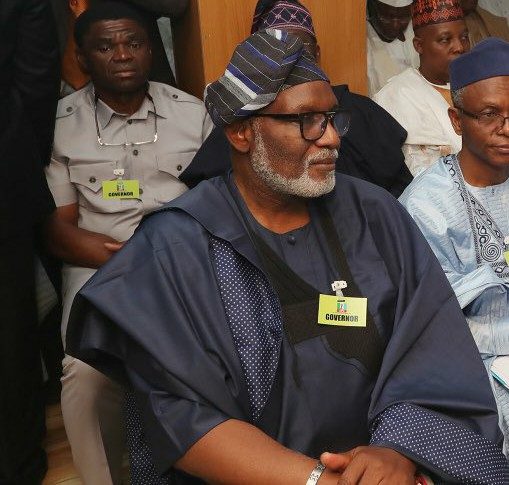 The incompetence of the National Chairman of the All Progressives Congress, APC, Adams Oshiomhole, has been exposed through the primaries of the party conducted recently.

The Governor of Ondo State, Rotimi Akeredolu, made this remark on Wednesday in reaction to the claim that he led some members of the party in an alleged plot to pass a vote of no confidence on Oshiomhole.

Akeredolu, who described his accusers as mere opportunists said the primaries conducted by the party was a mere charade.

He said his opposition to the candidacy of Oshiomhole for the post of the national chairman had been justified by the irregularities he said characterized the primaries.

He however said his support for the return of President Muhammadu Buhari to office in 2019 was unshaken.

It would be recalled that Akeredolu has been cross with the leadership of his party over the choice of Senator Robert Boroffice as the representative of Ondo North Senatorial District of Ondo State in the National Assembly.

His preferred aspirant was said to have been turned down to allow Boroffice continue his stay in the Senate.

Akeredolu, in a statement by his Senior Special Adviser on Special Duties and Strategy, Doyin Odebowale, said only sycophants would fail to see the shortcomings of the Oshiomhole leadership.

The statement reads in part:  “He did not hide his opposition to Mr Oshiomole’s aspiration for the simple reason that the leadership of a party, especially the one just emerging from a merger, should distance itself from egregious and inherently destructive narcissism.

“Recent events seem to justify this position as prescient. Only sycophants will fail to see the obvious. Mr President would not have expressed worries over the crises in the Party if everything had gone on smoothly.

“The handlers of the mob strive in vain to set the President against certain government functionaries considered antagonistic to their pernicious scheme for dominance.

“Their devious plot to outsmart those perceived as opposing their expansionist tendency compelled them to take desperate measures. Anyone endowed with an attitude of sobriety should have seen the need for calm.

“Rather than retrace their steps and display genuine contrition, their desperation pushes them to embrace measures capable of not only hurting the Party, but, regrettably, the President, whom they pretend to love so much.

“Those who collected varying and humongous amounts as fees from aspirants during the last grandiose charade called primaries and submitted names dictated to them by a cabal, notorious for capturing political power for unbridled pillage, should be bold to explain their real motives to the people. They should be honest enough to deal with the issues.”

Recall that on Sunday, Oshiomhole’s Chief Press Secretary, Simon Ebegbulem, in Abuja, accused some stakeholders of plotting to remove his principal through a vote of no confidence.

Ebegbulem said the sin of his boss was his refusal to be dictated to and act contrary to the rules.

He denied the allegation that the action of his boss had been responsible for the division in the APC.

According to him, rather, the party had continued to increase in its fortune which would manifest more in the 2019 elections.