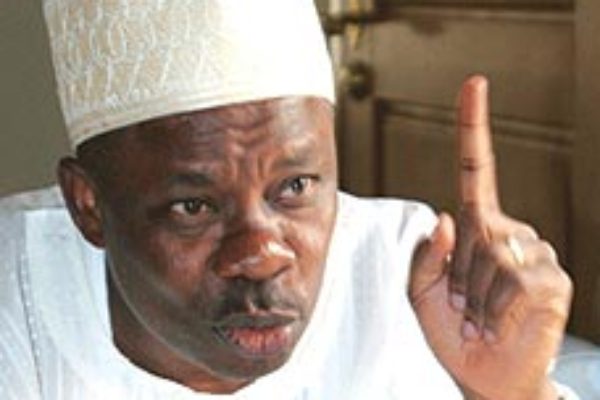 Akinlade is Amosun’s choice in the All Progressives Congress, APC, primaries.

He was however declared to have lost to Mr. Dapo Abiodun.

Akinlade, has since defected to the Allied People’s Movement to realise his governorship ambition.

Amosun’s declaration of continued support for Akinlade came on the same day some of his loyalists who also plan to contest for different political posts, defected to APM.

Addressing a stakeholders’ meeting of the APC in Abeokuta, Amosun said much as he would not dump APC, he would support Akinlade against Dapo Abiodun.

He said he would also support the re-election bid of  President Muhammadu Buhari during the general election.

Speaking on the defection of some of his associates to APM, Amosun said it would be wrong for him to stop them from protecting the tickets they won during the party primaries for different posts.

Said he:  “When these people came, they told me they were leaving the APC, I said ‘no’ but I couldn’t stop them. In fact, Akinlade has my full support. I am not going to stop him. Everything I have, I will use to support him, let them try whatever they want to try, we also have our strategies and I am not going to hide behind one finger.

“I remain in the APC because that’s what those people want. They want us to leave the APC but they are joking. I will stay in the APC to ensure that (President Muhammadu) Buhari wins in Ogun State and to let them know that they can’t subvert the will of the people of Ogun State.

“Every day, I will campaign for President Muhammadu Buhari, we will do everything possible to ensure Buhari wins massively in Ogun State, but they should not miss it. I , Senator Ibikunle Amosun, will not support anyone (Dapo Abiodun) they are bringing.

“Why would a reasonable person with less than 10 per cent lord it over the majority? It can’t happen. They know there was only one primary and they have called me to say that, and we have done everything possible to right the wrong, but they are already destroying the party.

“God will punish me if I stop Akinlade. All of you who are supporting Akinlade, you have my support and blessing. They are talking about party supremacy, what happens to party supremacy at the local level?”

Meanwhile, former Governor of Ogun State, Chief Olusegun Osoba, has declared that Dapo Abiodun remained the APC governorship candidate in the state and that the party would remain united to support him.

Osoba who spoke on Monday while the APC governorship running mate, Mrs Noimot Salako-Oyedele, was announced in Abeokuta said those who were opposed to Abiodun’s emergence were disappointed about the unity of the party.

He said his grouse with Amosun was the zoning arrangement of all political offices.

He said he was opposed to a system where a particular zone would benefit from the appointments to the disadvantage of the other two districts.

Said he:  “Whether they like it or not Dapo Abiodun has become the Ogun State APC governorship candidate. Those who don’t wish the APC well have been disappointed. The task has begun. We are in the midst of enemies and we should come together as one.

“I want to urge all that we have just started. I am 80 years old and I am old enough to say things the way they are. We don’t want any group within the APC. It is an insult.

“We are just going into an election period and we should stop insulting our candidate.

“From now onward, let us be one. Leaders, don’t hold group meetings, but what you should be having is the APC meeting as a party and it should be for the governorship candidature of Dapo Abiodun.

“Three-quarter of your poster should bear the APC logo, a quarter for a candidate’s picture and another quarter for the party’s slogan.

“So, as we are moving today, disunity is over. We are fighting a vicious war and we should fight it within the purview of the APC constitution. Go and deliver your polling booths.”