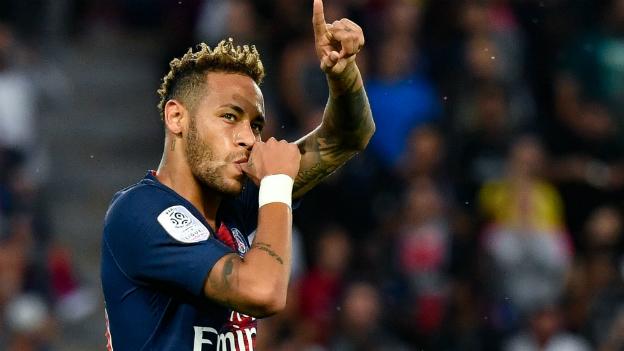 The Brazil international’s strike in first-half stoppage time was enough to settle the Classique as PSG registered 23 shots on goal in a deserved triumph at Parc des Princes.

Marseille had Samuel Gigot sent off for a dangerous challenge on Neymar as the visitors suffered their first away defeat of the season.

It is their longest streak in the French top-flight since going 21 games without defeat between May 2018 and January 2019.

Marseille had Pau Lopez to thank for keeping PSG at bay early in the first half as he denied Lionel Messi twice inside the opening four minutes.

He also blocking Achraf Hakimi after Kylian Mbappe picked out the full-back less than 60 seconds later.

But the hosts broke the deadlock just before the break.

Marco Verratti robbed Amine Harit of possession before Vitinha and Mbappe combined to set up Neymar, whose first-time shot went in off the post.

Marseille came close to equalising early in the second half, with Jonathan Clauss latching onto Alexis Sanchez’s lofted throughball before drawing smart reflexes out of Gianluigi Donnarumma.

Verratti and Mbappe almost doubled the lead at the other end, but the visitors’ hopes of salvaging a point were effectively dashed 18 minutes from time.

This was when Gigot was shown a straight red card for rashly taking out Neymar.

Messi was marginally off target with an attempted dink from Mbappe’s throughball later on, but PSG held out to pull clear at the top of Ligue 1.