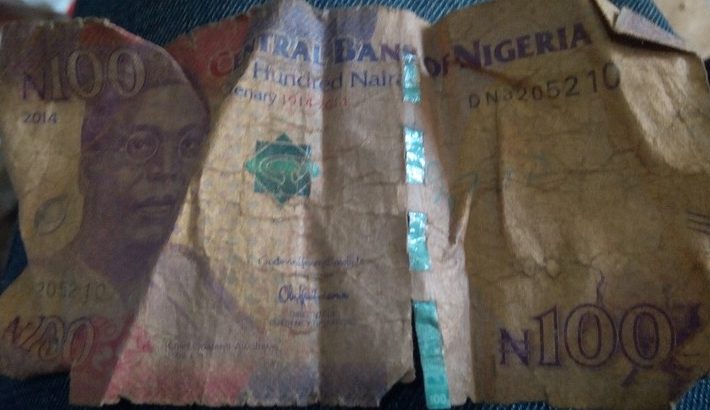 N100 (One hundred naira) note is in a terrible shape and no one seems to be doing anything about it.  Ragged and jagged, it looks so nauseating such that no one would really love to touch it.  But for the fact that it still carries the value of “money” that it is, everyone has continued to accept and use it as necessary.

Perhaps one reason many still accept the currency in its devastating state is because there’s hardly any new one in town.  That is why anytime anyone, whether in a bus or at the market place, attempts to reject it, the refrain is usually that “you can’t find a better one.”

I had attempted insisting on a better N100 note when I was given as a change, but the others brought out by the commercial motorcyclist I rode was simply worst.  It was terrible; I ended up taking the one he had earlier given which ordinarily one would need to wash ones hand after “disposing” it.

Need anyone be told that the naira notes, no matter the denomination are a significant symbol of the nation which should be taken care of?  That is the obvious reason it has been forbidden that it is sprayed at parties.  The sight of the harm done to naira notes at parties is unpleasant.  With some arrogance, the notes are sprayed and at times flung around with those dancing making a mess of it as they “grind” them on the floor.  They wear them out and when they are ready to be spent, they are not worthy of the name; they are not worthy to be symbols of the country.

Over the years, we have been taught how to keep our naira notes in order to maintain them well.

Government had, through television and radio sponsored adverts taught us how to keep them safe.  We were told to use the purse or the wallets.  Our market women who preferred to tuck their money away in their brassieres were told not to do so any longer because of its terrible effect.

To a reasonable extent, the campaigns yielded fruits and Nigerians somewhere became a different set of people in that regard.  For quite some time, sanity was restored and the naira notes seem to enjoy a good time.

However, all of a sudden, Nigerians started to witness an “influx” of bad naira notes – N100 (one hundred naira). How this came to be is befuddling.  In its sorry state anyone who might be thinking of keeping the N100 (one hundred naira) notes in the bra for safe keeping would think twice.  Who would want to possibly, risk breast cancer.

It befuddles many, how the N100 (one hundred naira) note got that bad.  The amount of dirt which they harbour will surely make the late sage, Chief Obafemi Awolowo, whose picture is displayed to make him cringe in his grave.

Before now, the lack of clean naira notes for trading activities had been blamed on those who, in connivance with bankers, got new naira notes and sell at or for parties.  I think that has reduced as some of them had been arrested.  This is not to say that they don’t still exist anyway.

The question again is:  Why have all the N100 (one hundred naira) notes gone bad?

Notwithstanding the fact that one of the qualities of money as told us at the elementary stage of Economics is that it must be durable.  But having been battered over the years, these naira notes of our have endured too much and gone bad.

The other reason could be that the CBN has refused to print new naira notes based on the information that the cost of printing the notes is higher than the value of the money.

If that is the case, who would anyone blame?  The government, of course.  Our money is said to be printed abroad, despite the mint company here in the country.  Why can’t the necessary facilities be put in place to ensure that we print our money here.  Who knows, the story might be true.

In conclusion, let me say that it is important that something is done fast to rid our society of the ragged and jagged N100 (one hundred naira) notes.  It is urgent.