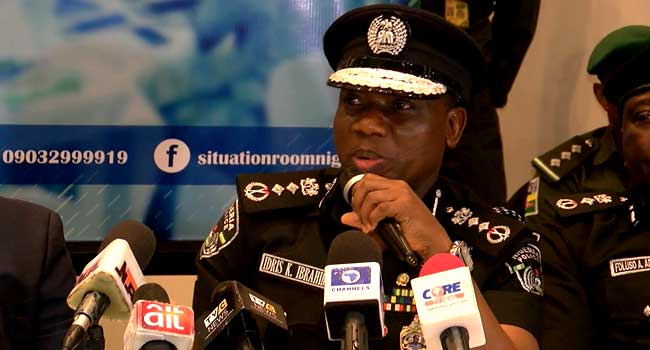 Idris gave the advice on Tuesday while speaking with journalists at the Presidential Villa, Abuja, shortly before his successor was formally unveiled by President Muhammed Buhari.

His words:  “The advice I will give is that just like in our time, he should try to go round the country and adopt measures to ensure that the Nigeria Police Force gives maximum protection to lives and property.”

Wishing Adamu well, Idris expressed confidence in his ability to do well.

He said he had worked with him and he knew him very well.

Speaking on his own tenure, Idris said he served the nation very well

Answering reporters’ questions, Idris said the major challenges he had were in the area of recruitment.

“I am sure you are aware that the government has just given us approval to recruit more people yearly, by the grace of God by this year the number of police officers is going to increase considerably,” he said.

He spoke about the preparedness of the police for the coming election.

According to him, the police would do well.

He said the police had done well in the past elections and would do the same in the coming one.

Ibrahim Idris who retired on Tuesday having attained the age of 60 was appointed by Buhari in 2016.