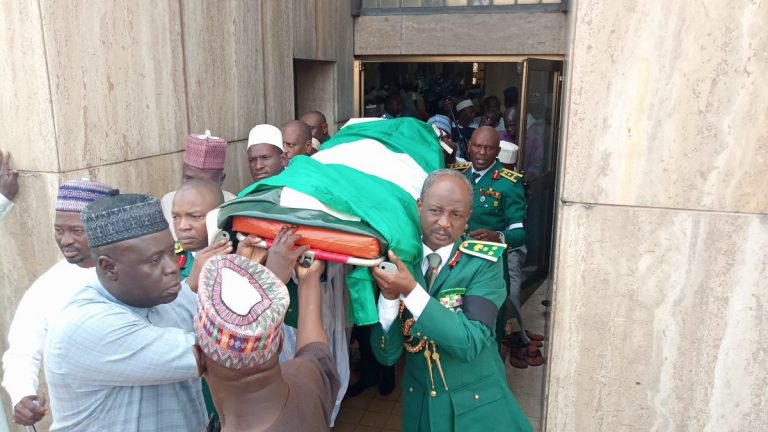 When, last week, the remains of General Muhammed Alkali was discovered in a well at Guchwet Village in Shen District of Jos South local government area of Plateau State, the Nigerian Army promised to give him a befitting burial.

As promised, he was given a befitting burial on Saturday at Gudu Cemetery in Abuja.

Before the burial which was according to Islamic rites, the funeral prayer was led by the Chief Imam of Abuja National Mosque, Dr. Kabir Mohammad.

Describing Alkali as a national hero, Mohammed said the situation surrounding his death was unfortunate.

He said it was remarkable however that his body was recovered.

“Even though it took weeks to trace the whereabouts of late Alkali’s corpse, we thank Allah, we thank the Federal Government and we thank the Army for the dedication to find his body, so that he can be buried according to Islamic rites,” the Chief Imam said.

Mohammed stressed the need for the Federal Government to ensure safety of lives and property in the country.

The funeral was attended by, among other dignitaries, the Chief of Army Staff, Lt.-Gen. Tukur Buratai; former Military Administrator of Lagos, Retired Brig.-Gen. Buba Marwa, and former Minister of Works and Housing, Alhaji Sunusi Dagash.

Alkali was declared missing on September 3 while travelling to Bauchi State from Abuja.

Speaking upon discovery of his remains, Brigadier General Umar Mohammed, who led the search and rescue operation said Alkali would be given a befitting burial after a parade.

The discovery of his grave was announced by the General Officer Commanding, 3 Division, Rukuba Barracks, B. A. Akinruluyo.

He disclosed that those arrested in connection with the killing of Alkali confessed that the remains of the deceased were exhumed and reburied.

Akinruluyo who addressed the press on the case however stated that the identities of all those behind the killing were known and the military would leave no stone unturned to apprehend them.