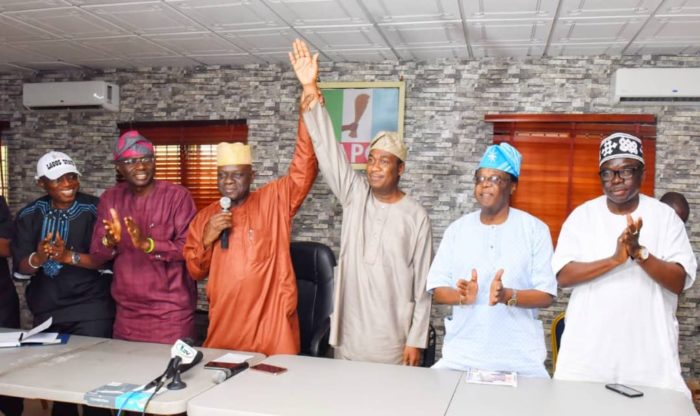 Former Lagos State Commissioner for Works and Infrastructure, Dr. Femi Hamzat, has been announced as the running mate of the Lagos State governorship candidate of the All Progressives Congress, APC, Mr. Babajide Sanwo-Olu.

The announcement was formally made on Sunday by the Lagos State Chairman of the APC in the state, Alhaji Tunde Balogun, at the party’ secretariat in Ogba, Lagos.

Describing Hamzat as very competent for the job, Balogun said his emergence followed the approval of major stakeholders and the topmost decision making body.

“After the endorsement, it is important for me to publicly and officially present Dr. Kadiri Obafemi Hamzat as the running mate of our candidate, Mr Babajide Sanwo-Olu for the 2019 gubernatorial election in Lagos State.”

Expressing his happiness at the choice of Hamzat, Sanwo-Olu said with a running mate like him, the task of taking Lagos State to a greater height would be achieved.

“We have been friends and brothers for close to two decades and he is a man of deep intellectual knowledge. He is a man of high level of integrity.

“He is competent and I know he is going to help greatly to deliver the Lagos of our dream. With a technocrat like Hamzat, we will take Lagos to the next level,” he said.

Hamzat, while accepting the offer, thanked the party for considering him worthy of the position.

He said:  “I am very happy. I feel very happy and I feel a sense of responsibility that the party after sitting together, has selected me to be his running mate so that we can work together with our experience…

“Mr. Sanwo-Olu and I understand what it requires to cook what Lagosians desire. So, we promise to do our best to deliver the Lagos of our dream.”

Born September 19, 1964, Hamzat is a graduate of Agricultural Engineering from the Universtiy of Ibadan (1986).