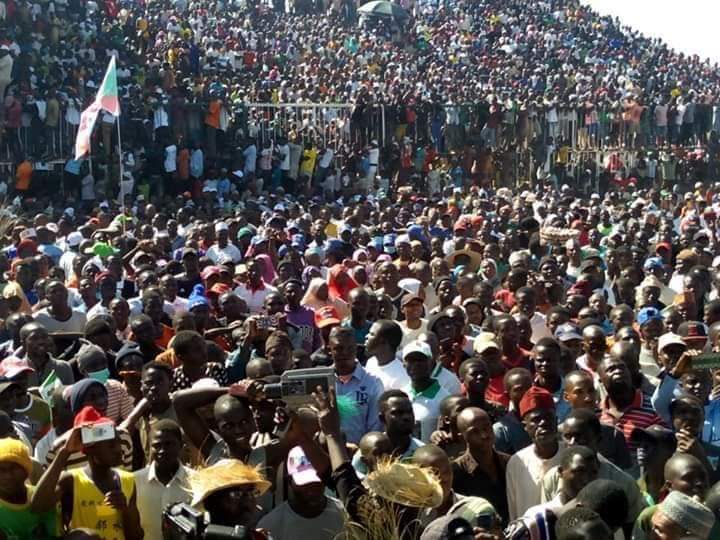 The disruption made it impossible for the president to make a speech during at the occasion.

He was in Jos in continuation of his presidential campaign.

Security agencies found it impossible to control the crowd which surged to the podium.

The president was taken away through the rear exit.

However, in a statement which was issued by the Special Adviser to the President on Media and Publicity, Mr. Femi Adesina, the president expressed gratitude for the overwhelming support he got.

President Muhammadu Buhari extends heartfelt appreciation to the people of Plateau State, who turned out in innumerable numbers to welcome him in Jos, during his presidential campaign visit on Saturday.

The Rwang Pam Township Stadium, venue of the event, was completely overrun by a sea of humanity, made of ecstatic supporters of the President, who kept hailing the man they love and admire. So much was the tumult that the President could not eventually address the crowd.

After waiting for about an hour, with the melee not receding, but rather increasing in tempo and fervour, President Buhari received illustrious Plateau citizens who were crossing to the All Progressives Congress (APC) from other political parties, waved at the appreciative crowd, and left for Abuja.

The President lauds Plateau people for turning out in their thousands to welcome him into Jos, lining the roads right from the airport, defying the boiling sun.

He thanks them for their steadfastness over the years, and for continued faith in the administration, which was indicated by the turnout at the stadium.

President Buhari sues for greater restraint from teeming supporters and appreciative Nigerians in other campaign stops ahead, pleading that they allow the campaign programme run as planned, since it is also an opportunity for him to give a stewardship report.

“We have been serving you for about four years, we want another four years mandate from you, it is needful for you to allow us give you a report. You deserve it,” the President says.

Campaign visits resume on Monday, as President Buhari is resolved to get to all parts of the country before the February 14 deadline.