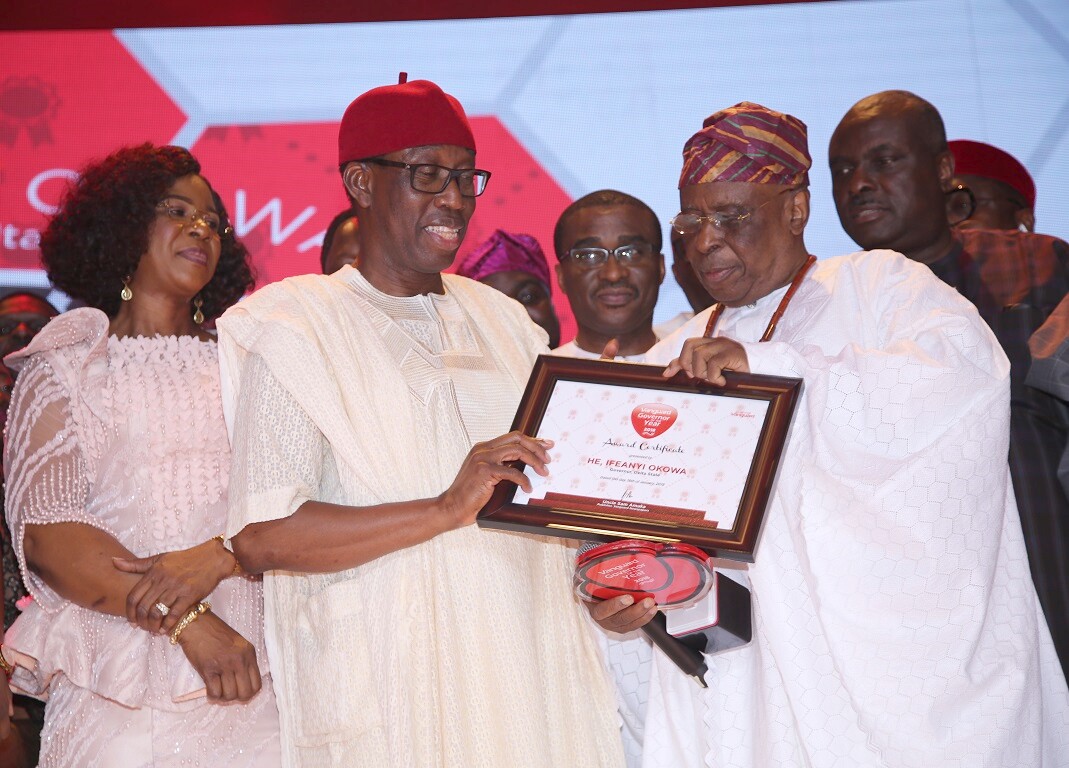 Delta State Governor, Dr. Ifeanyi Okowa, has said Governor of the Year Award he has received, as well as others, in recognition of his administration’s excellent performance in the delivery of democratic dividends, will spur him to continue with his selfless service to Deltans and humanity.

The governor made the pledge on Friday in Lagos shortly after receiving the “Governor Of The Year, 2018 Award” at an annual personality award organised by Vanguard Newspaper Limited.

Governor Okowa who was accompanied by his wife, Dame Edith had on Thursday night, received Independent Newspapers “Governor Of The Year Award.”

He has also been tipped to receive “Governor Of The Year (Infrastructure and Human Capital Development) award” at a ceremony organised by DAAR Communications Limited, owners of African Independent Television (AIT), on Saturday.

According to the governor, “I want to give thanks to God almighty for this award, I want to thank my wife and my children for their support; I commend the sacrifices being made daily by members of the state executive council, political office holders which has made us to succeed, but, most importantly, I thank Deltans for their partnership and I am happy to dedicate this award to them.”

“Deltans are wonderful, understanding people; through collaborative efforts, we have made great impact on the provision of infrastructure, development of our people to achieve prosperity for all Deltans; in the next four years, we hope to build on the successes we have made thus far, with God, effective partnership, we can,” Governor Okowa who was presented with the award by former Governor of Ogun State, Chief Segun Osoba, said.

Chairman of the occasion, Sir Arthur Mbanefo, had congratulated all the award recipients, observing that, “they are all leaders in their respective fields of endeavour.”

He used the occasion to challenge Nigerians to get it right through the ballot box in the general elections, asserting that “Nigeria is not working; it is in our hands to mend the brokenness of Nigeria and make it work again.”