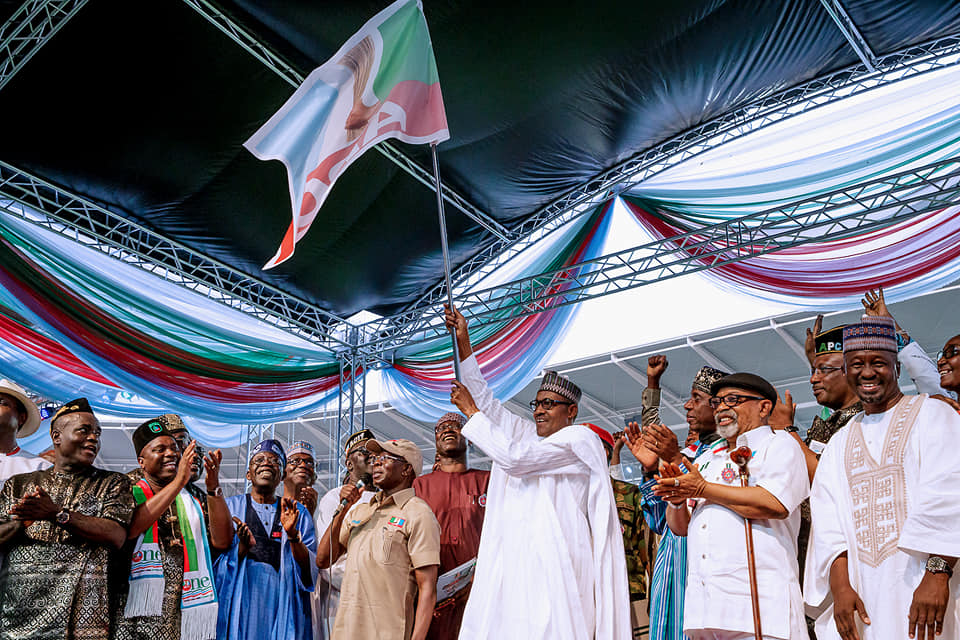 President Muhammadu Buhari, on Friday, flagged off his campaign ahead of the 2019 general election with a promise to intensify the battle against corruption and secure the country.

He also promised to work hard on improving the economy.

The rally was held at Uyo, the Akwa Ibom State capital.

In attendance were top members of the ruling All Progressives Congress, APC, including the National Chairman, Adams Oshiomhole, and Asiwaju Bola Tinubu among others.

The president, while giving assurance that Nigerians would not regret voting him in 2019, said there would be no more “handouts.”

“They have resorted to indoctrinating young men and women, especially girls, dress them up in explosives and explode themselves in churches, mosques, market places and motor parks. I assure you that eventually, we are going to clear them off from our country.

“The second thing is about economy. Our population is over 60 per cent of young men that is 30 years and below. Our main problem is employment. We are very lucky, the two previous rainy seasons were good, and we’ve virtually achieved food security. We don’t import rice now. We are encouraging our farmers and we’ve regained food security.

“When I was around in uniform and much younger, I arrested former president, vice president, the governors, the ministers and told them that you are guilty until they can prove themselves innocent.

“I myself was arrested and detained. So, when I came in agbada, I decided to follow what this system accepts and that those who are corrupt, should be investigated and prosecuted.

“We are doing that and we will not stop. I assure you, we have collected properties, we’ve collected cash. We have established a single treasury account to put money that are accruing to the government into one account which can be traced and accounted for.

“Nigerians will be informed from time to time on the money we’ve recovered, and from who and how we are going to use to develop this country.

“I assure you, in 2019, trust in us, we are going to secure this country. We are going to stop corruption. So, you better stay and work for a living because there is no more handouts. I thank you very much for organising this.

“I assure you no Nigerian will regret voting us into office and we will continue to improve the situation-security, economy and fighting corruption.”

Oshiomhole, speaking at the occasion praised Buhari as a man of good character.

In obvious aspersion against the presidential candidate of the Peoples Democratic Party, Atiku Abubakar, Oshiomhole said of Buhari:  “The one that is celebrated by fellow world leaders, the president who can go to America, and can stand with ex-President Obama and President Trump; not those who can’t get visa outside Nigeria. The one and only President Muhammadu Buhari.”

He stressed that the thrust of the APC campaign would be issue of character.

Said he:  “The only thing to speak on today before I perform my simple task is to say that this coming election, one of the issues that would form the basis of our campaign is the issue of character.

“And I noticed over the past 48 hours the opposition, particularly the Peoples Democratic Party, PDP, they’ve decided to look for mud, wherever they could find, to throw at your person. The more they do it, the more the people laugh at them.

“I am happy that the PDP candidate cannot speak in certain parts of the world and there is nowhere you will go where you cannot speak.”