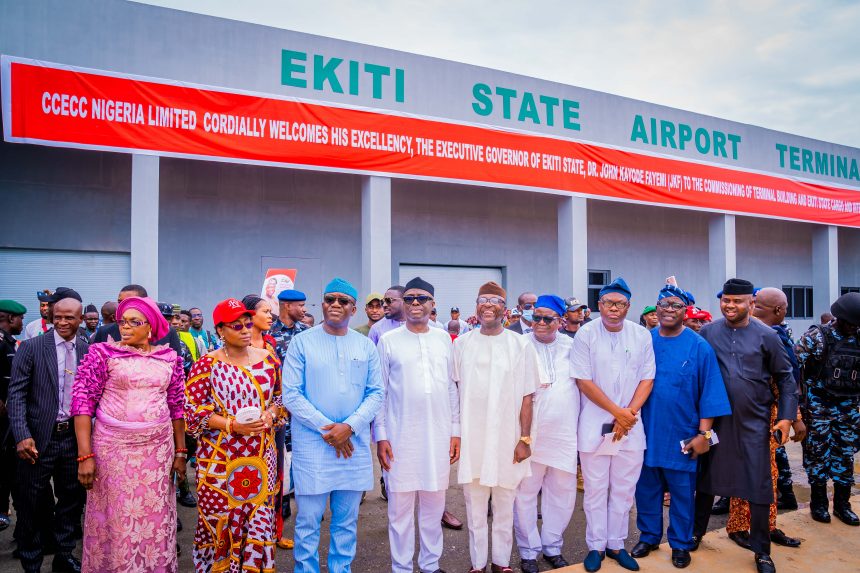 It was a dream come true for the people of Ekiti as the Ekiti State Agro-Allied International Airport, Ado- Ekiti, was inaugurated for public use shortly after the first aircraft landed at the facility on Saturday.

With the commissioning and landing of the first flight on its soil, Ekiti has joined the elite club of states in Nigeria that boast of functional airport which is expected to boost export of agricultural produce, service educational and health institutions and abundant tourism potentials in the state.

The first aircraft, ATR 42 Nigeria Air Force plane piloted by Flight Lieutenant E.A. Balogun, landed at the airport’s runway at exactly 10.20 a.m. amidst cheers and excitement by eminent guests, government officials and members of the public who came to witness the historic occasion.

Minister of Aviation, Senator Hadi Sirika, who performed the official inauguration of the airport, was among the personalities on board of the aircraft which flew all the way from Abuja to make the historic landing on Ekiti soil.

An excited outgoing governor, Dr. Kayode Fayemi, who could not hide his joy expressed satisfaction that the project eventually saw the light of the day ten years after its conception during his first administration in 2012.

A fulfilled Fayemi at the conclusion of his speech before the commissioning of the airport said: “My job is done, Ekiti Kete,” which drew a thunderous applause from the crowd that massed on the tarmac to be part of the auspicious occasion.

Fayemi also used the occasion to give an assurance to the people of the state that the federal roads that were in dilapidated condition would be given attention to bring relief to their users and complement the newly inaugurated airport project.

The governor said himself, Minister of Industry, Trade and Investment, Otunba Adeniyi Adebayo and the Ewi of Ado Ekiti, Oba Adeyemo Adejugbe had been making strong representations to the federal government to facilitate urgent intervention on federal roads in the state that were in present state of disrepair.

Shortly after the plane landed and taxied to the tarmac, the excited crowd of residents and guests drew out their phones to take the pictures of the moving aircraft and enthusiastically welcomed the Aviation Minister and officials of agencies under his ministry who disembarked from the aircraft.

In his welcome address, Mr. Zhang Zichen, the Chairman of China Civil Engineering Construction Corporation, CCECC, which handled the project, praised Governor Fayemi for the vision which he said would change the face of the state’s economy.

Zichen explained that the airport was not just a project but “the engine of the economy of the state” said it would open up Ekiti to more development and investment to the benefit of the state and business community.

The CCECC boss who also described the airport as a “landmark project” said it was among notable projects completed by its corporation.

He also hailed the aviation minister for being part of history and making the airport a reality.

Fayemi said the inauguration of the airport was in fulfillment of his promise to continue to work for the people of the state who elected him to his very last day in office saying the project saw the light of the day despite the very limited resources available to the state.

The governor noted that his administration defied the challenges of COVID-19 which affected global, national and state economies to ensure that the dream of the airport became a reality which culminated in the test landing of the first flight on his last day in office.

Going down the memory lane, the governor recalled that the move to start the project began during his first tenure in 2012 with a Committee on the Viability of the Airport led by legal luminary, Aare Babalola, raised by his then administration noting that the committee submitted its report in 2012.

According to him, his first administration through the State Executive Council considered and approved the report submitted which was accommodated in the its plan for 2013-2015 Medium Term Sector Strategy but the plan was halted by his exit from office after the 2014 governorship election which placed the project on suspension.

The governor said his successor in office, Mr. Ayo Fayose, embraced the idea to continue with the project but it couldn’t see the light of the day until the tenure ended in 2018.

He said further: “Upon my assumption of office in 2018, I appointed aviation experts and industry related officials to kickstart the implementation of the project. They made several Advocate visits to communities in order to meet the requirements for the establishment of the airport.

“The administration took the following steps: we secured the approval, the revalidation of approval from the Federal Ministry of Aviation. We also secured the Department of State Services (DSS) clearance, we paid all the necessary fees for the construction, planning and certification to the Nigerian Civil Aviation Authority and conducting Environmental and Sustainability Impact Assessment.

“As a government that adheres strictly to the rule of law with unwavering respect for the rights of our people, we made several appeals to communities affected for enumeration of their farmlands to ensure commensurate monetary compensation is paid on their crops.

“To this end, a total of 669 claimants were duly compensated out of those that presented themselves for the exercise. We acquired 4,017 hectares of land from nine communities: Ago Aduloju, Aso Ayegunle, Bolorunduro, Igbogun, Araromi, Obbo, Afao, Orun, Igbemo and Ijan covering three local government areas in the state.”

Aviation Minister Sirika also announced to the excited audience that the federal government would site a cargo facility at the airport. He described the Ekiti Airport as “an extremely very important project” which would in turn facilitate import and export of goods and commodities.

Sirika recalled that when he was on the site for groundbreaking in October 2019, there were divergent views as to the viability of the project noting that airports were being used by what he called “one-city nation-states in the world” to drive their economy.

He added: “I use to make an assertion, that one mile long road leads to nowhere but one mile runway leads to everywhere. You see, I came here today through the runway of this airport provided by Governor Fayemi. There is future with this project, market and trade can drive everybody here.

“I was at ABUAD, I saw the university, the farm, the industrial park and the hospital. If there is an airport here, it will connect people to this facility and reduce foreign medical tourism. Airports are by no means the best catalysts for economic growth of any state or nation.

“35 per cent of global trade by value is moved through airports and $18.6 billion of cargo is moved daily through air transportation. The wealthy among you should take to agriculture for example and begin to produce things that you will export to other parts of the world.

“You can be land-locked but you cannot be sky-locked. We can all see the importance of having a facility like this. Thank you Mr Governor, you have provided this facility for the people of Ekiti State; they should own it, they should own it.”

The guests were later conducted on facility tour round the terminal and other facilities at the airport.