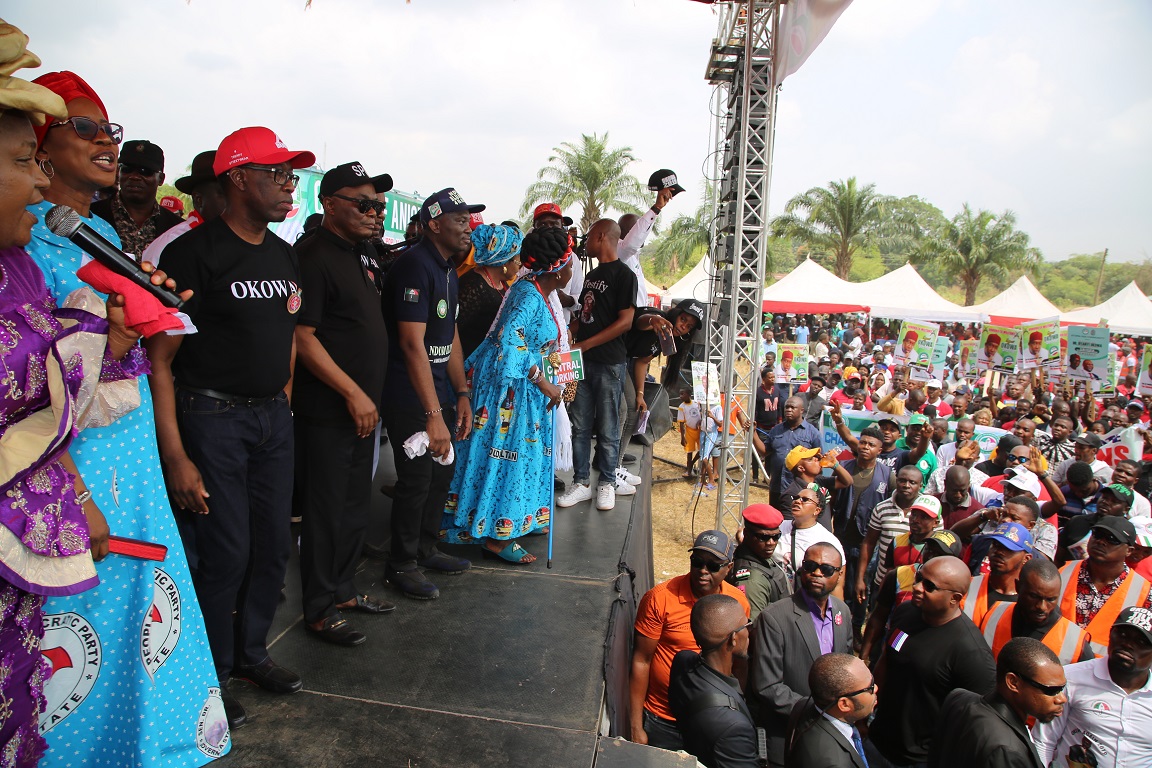 Okowa and others at one of the rallies
SHARE

The governor made the call on Tuesday at the PDP campaign rallies at Issele-Uku, Akwukwu-Igbo and Asaba in Aniocha North, Oshimili North and Oshimili South local government areas of Delta State respectively.

According to the governor who was accompanied to the campaign rallies by his wife, Dame Edith, his running mate, Burutu Otuaro, and other top politicians in the state, said with unity and cooperation, the PDP would win in all the elections billed for February 16 and March 2, 2019.

“We are going into the elections as a united people, we should cooperate, because, through cooperation, we will get maximum number of votes; let no one be involved in anti-party activity, let us get votes that all of us will be proud of,” Governor Okowa said at Issele-Uku.

He added:  “The leaders and the youths should work together, everybody should be recognised; this is the turn of Delta North to complete two terms because, it will not be good that after working for other Senatorial Districts to do two terms respectively, the people of Delta North will fail to support their own for two terms; we have worked, our success stories abound in all parts of Delta, we will do more in our second tenure because, we are experienced and we have peace.”

At Akwukwu-Igbo, he challenged the people to check any form of electoral malpractice, saying, “there will be no room for rigging, there should be close monitoring of the elections because our votes must count, collect your Permanent Voters Cards (PVCs), encourage others to get theirs; we should get all the votes that we can.”

Excited with the huge turnout of Deltans at venues of the campaign rallies, Governor Okowa expressed confidence that united, he might be returned unopposed by the people as his main opponent in the elections may join his campaign train.

The governor at Asaba, stated: “I love Deltans, you are my people and I am happy with the show of love by you all to me and my administration; from the feelers reaching me, the heavy turnout at the rallies, it will not be a surprise that Deltans will return me unopposed.”

“I have spent several years in Asaba, I am proud to be a Deltan; Asaba should wear a befitting look because it is the mirror with which investors, visitors see the entire state; we are constructing storm drainage in Asaba, we are going to do the same in Uvwie and Warri; our development is not limited to major towns and cities, the rural areas are having good impact of our development programmes,” the governor said, adding, “in the second tenure we will do more in the area of entrepreneurial programmes for our youths; we will do a lot of empowerment and provision of infrastructure that after our tenure in 2023, any Governor that will emerge in Delta State will have a lot of challenge to meet up with the standards that we are setting.”

He thanked the people for their continual support and asked them to vote for all the candidates of the PDP in the elections.

While also calling on PDP members to remain united, they observed that the governor had done a lot to be re-elected, adding that with the zoning formula of the PDP, he would be re-elected with high margin of votes in the election.