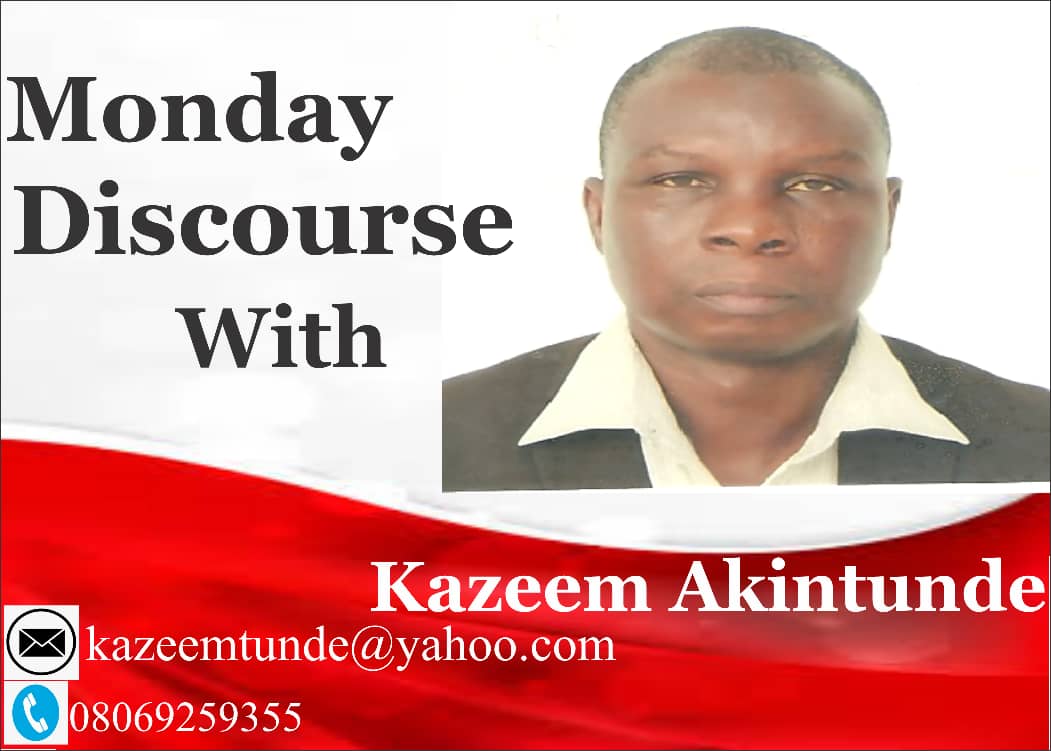 Nigeria is a funny country. Ours is perhaps the only country in the world where we make use of ex-militants to protect our crude oil pipelines. The Police, Army, Navy, NSCDC, and other security agencies can’t do the job. Ex-militants, who were once in the trenches, fighting the federal government, are now in charge of protecting those facilities they once targeted for destruction for not being allowed to benefit from crude oil that was in the bowel of their land. Is it not an irony that we now pay N4 billion to non-state actors to protect our crude oil pipelines?

What Nigeria’s security agencies could not detect and put a stop to for years, took the Government of Epkemupolo, better known as Tompolo, less than a month to detect. All those in charge of our security should actually bury their heads in shame. Nigeria has become a laughing stock in the world. Those who are being paid to protect us and our national assets are complicit in the stealing and ruination of the country. Nigeria is an oil-producing nation but the discovery of crude oil has become a curse for Nigeria. In spite of the rise in the price of crude oil in the international market, with most oil-producing countries smiling to the banks, Nigeria is losing money on all fronts. We have been consistently losing money from crude oil sales as we could not meet up with our crude oil production quota allocated to us by OPEC, which we could have sold in the international market due to large-scale stealing. Worse, the citizens are being made to pay more due to the fact that we lack the capacity to refine a fraction of what we produce for domestic consumption due to comatose refineries. We have been told again that we should expect more than a 100 per cent increase in the prices of refined petroleum products when the subsidy on petrol is completely removed next year.

The Organisation of Petroleum Exporting Countries, OPEC, increased Nigeria’s crude oil output quota to 1.830 million barrels per day, mb/d, from 1.826 mb/d in September. It is doubtful if we would be able to meet our crude oil output as the federal government, through the Nigeria National Petroleum Corporation Limited, NNPCL, has come out to tell us that over 600,000 barrel of crude oil is stolen in Nigeria daily. While a fraction of the crude finds its way to the international market, some are left in the country to be refined by ‘big boys’, who operate illegal refineries in the creeks of the Niger Delta.

This is a country that has the capability to export close to 2 million bpd. If we export more crude, the nation earns more dollars to finance its budget and meet up with its obligations to Nigerians. In monetary terms, we are losing $700 million daily to the so-called big boys in Nigeria. The impact on the country’s economy is scary. The 2018 NNPC oil and gas audit report revealed that 1,894 breaks were recorded on pipelines that year, resulting in a revenue loss of N27.551 billion. The loss increased to N851.84 billion in 2019 and reduced slightly to N159 billion in 2020. Between 2021 and June 2022, the Nigeria Upstream Petroleum Regulatory Commission NUPRC, reported that the nation’s oil output dropped by 12.5 per cent to 1.4 million barrels per day, including condensate, in the first half (January–June) of 2022, from 1.6 mb/d in the corresponding period of 2021. Regrettably, those we elected to protect us, rather than carrying out their mandates, deem it better to pay N48 billion a year to another big boy to do their job for them.

We have now become a joke in the comity of Nations. Nigeria as a country can no longer meet her financial obligations. Yet, we produce more millionaires daily from outright stealing of crude oil. More than half of next year’s budget projection will be coming from loans. There is no money coming into the economy and so, it can no longer sustain itself. Crude oil, which used to fetch us over 60 per cent of our foreign exchange, has become a tool in the hands of corrupt government and private officials for self-enrichment. The three tiers of government no longer have enough revenue to share. Many state governments are owing workers’ salaries while payment of pensions to retirees have become a ding-dong affair. Yet, many Nigerians are not seeing the bigger picture. It will soon get to a stage where individuals will be loaning Nigeria money to pay the salaries of her workers.

There is no longer accountability in the country. Those entrusted with the leadership of Nigeria have failed woefully. Many now get away with ‘blue murder’ because they know that nothing will happen to them. It’s like Nigeria is now on auto-pilot.

A ship was arrested recently in the creeks of the Niger Delta with illegally obtained crude oil. The arrest was again carried out by one Tompolo and his boys. They were offered N25 million in cash to look the other way but they rejected the money. The arrested ship was handed over to the Navy and less than 24 hours later, it was set ablaze with its cargo. Who gave the order for the ship to be destroyed? Was it done to conceal facts and give a soft landing to those behind the seized ship and cargo?

Also recently, a 3-million capacity supertanker, MV Heroic Idun, illegally loaded with crude oil in the Niger Delta, sneaked into the nation’s territorial waters, curiously escaping the efforts of the Nigerian Navy to stop it. It was the Navy of Equatorial Guinea that later arrested the ship.

The perpetrators of the horrendous oil theft in the region are varied and contentious. They allegedly include unscrupulous elements from local gangs, communities, and even religious groups. However, the bigger thieves are the political and economic elites who use superior technology and experts to drain off about 40 per cent of our crude oil production output. The alleged involvement of security operatives in criminal sabotage and illegal bunkering is also no longer surprising. Remember that in 2019, Governor Nyesom Wike of Rivers State fingered even a commanding General Officer in the scandalous theft of crude oil in Rivers State. What came out of his revelation? Nothing.

Aside the GOC mentioned by Wike, it is a known fact that many of our security agents posted to the region, rather than do the job they were posted to do, collude with oil bunkerers to carry out several atrocities against the Nigerian state. It is so bad that security personnel now lobby to be posted to the region as it is certain for them to become millionaires within a few months and they are not bothered if they are caught and dismissed from service. They would have already been made for life.

Why is it difficult to track our oil? Is it rocket science to detect when anybody tampers with our crude oil pipelines? Bashir Jamoh, Director General of the Nigerian Maritime Administration and Safety Agency, NIMASA, after a weekly ministerial meeting in Abuja recently, said that plans are now underway to deploy round-the-clock surveillance to watch for oil theft. He said that the operation would include manned and unmanned aircraft, helicopters, ships, and armored vehicles, all connected to a headquarters known as the C4i Centre.

Jamoh said selected officers from the agency were undergoing three weeks of training in Italy to enable them to operate the aircrafts for the monitoring, adding that the drones “can move up to 100 kilometers and can stay in a place for 10 hours, taking data and sending it to our own operations centres for possible intervention.”

This, coming from Jamoh, tells a tale of a nation that is not serious about solving the theft in the oil industry. There is nowhere in the world where oil-producing nations do not know how much crude they produce, with proper monitoring systems put in place from day one. The technology that Jamoh is just planning to install, Femi Falana, SAN, alleges, had been bought several years ago for close to N50 billion but was either not installed or the system was compromised.

Saudi Arabia, an oil-producing country like Nigeria, has a Command Center where every single litre of crude produced in the Kingdom at any given time is known and the movement of products is monitored. In Nigeria, we are not bothered with accountability and transparency. It is better to produce strong individuals than strong systems. State governors are now complaining that the NNPC Limited is not remitting enough revenue to the federation account. Money that should be shared by the three tiers of government in the country is now being used to fund subsidy payments for refined petroleum products imported into the country. In essence, what the NNPC Limited does now is to sell the little crude oil to the big boys to fund the importation of refined products into Nigeria. I weep for this country.

Nasir El-Rufai, Governor of Kaduna State, has joined me in weeping for a nation that has been messed up by greedy elites who are all after enriching their pockets in a chop-I-chop style. Having been the main source of revenue in Nigeria, the sale of crude oil, which is now drying up, and has been misappropriated over the years, is now beginning to tell on our national life in monumental proportions. For El-Rufa’i to be complaining because money going to his state account from the federation account is dwindling is stating the obvious to the common man – that we have been robbed blind of our ‘national cake’, but I wonder for how long we will be lamenting and doing nothing?

First, the Nigerian state should stop abdicating its responsibility. The incessant award of pipeline protection contracts to non-state actors is a clear case of abdication of state responsibility. Agreed that Tompolo and his boys are doing a good job in the creeks but why do we have the Navy? The Air force, the Army? Are they not supposed to protect our national assets? The protection of Nigeria’s territorial waters and surveillance of pipelines are vested in the Navy and the Nigeria Security and Civil Defence Corps, respectively. It is high time they woke up to their responsibilities.

These security organisations need be better trained, equipped, and held accountable to ensure that they live up to their mandates, including abhorrence of corruption and collusion with criminals such as oil thieves and pipeline vandals. With oil theft crippling the Nation’s economy, President Buhari has directed the National Security Adviser and other security agencies to investigate and bring to justice, those behind oil theft in the country. Let us hope that the committee constituted to do this will do a thorough job and present workable solutions that will speedily arrest the ugly situation.

See you next week.