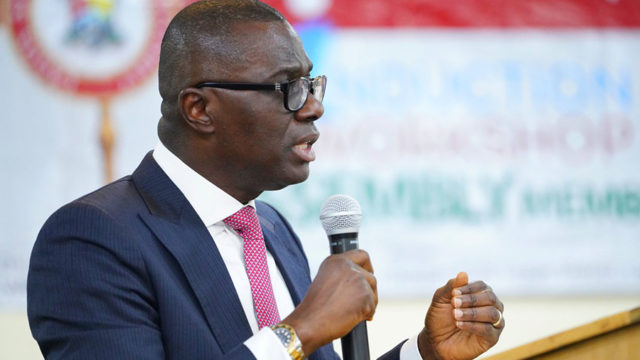 Lagos State governor, Mr. Babajide Sanwo-Olu, has appealed to world leaders, global think-tank and public office holders to work towards building a sustainable healthcare system for all and facilitate access for the poor and under-served.

Speaking on “Universal Health Coverage in Nigeria: Optimizing Institutional Opportunities and Partnerships for Success” at the weekend at the Royal Institute of International Affairs, Chatham House, Governor Sanwo-Olu charged global think-tank to optimise institutional opportunities and partnerships for the achievement of Universal Health Coverage, UHC.

“To achieve UHC, developing countries must first focus on offering their residents a basic minimum set of healthcare services, provided free at the point of care using subsidy, controlled premiums or at a pre-set tariff system, within government-regulated facilities either public or affiliated private,” he said.

Governor Sanwo-Olu said Lagos State as the most populous city in Africa, a financial hub and Africa’s 5th Largest Economy on the continent, has strategically strengthened the health system in pursuit of Universal Health Coverage.

He said Lagos State had been using policies to strengthen its health systems, pushing toward the achievement of UHC, which the state considered a journey and not a destination.

“In Lagos State, we believe that policy is the most effective tool that governments can deploy in the pursuit of stronger health systems and eventually approaching UHC. The right policies will lead to the development of robust health financing systems that will serve the needs of our huge and increasing population,” he said.

READ ALSO: Sanwo-Olu to would-be investors: Lagos ready for you

Speaking on some of the policies of his administration to strengthen the health system, Governor Sanwo-Olu said Lagos State government had consistently increased its budgetary allocation and efficiency to healthcare over the years, noting that the desire of his government was to eventually match the Abuja Declaration of 15 per cent.

He said his administration, through its capital infrastructure blueprint agenda, was upgrading and renovating its existing primary and secondary health facilities in the short term and it had commenced building new designed fit-for-purpose primary, secondary and specialist health facilities for the future.

“We recognise that the government cannot cover the funding gap in the health system without support from the private sector. In a bid to encourage public-private partnerships, we set up various institutions such as the Office of Public Private Partnerships (OPPPs) and IBILE Holdings, a private company owned by Lagos State for the purpose of engaging with the private sector. These institutions are mandated to facilitate and fast-track PPP opportunities in Lagos State.

“We understand the need for proper governance within the administrative structure of the health system and so we inaugurated boards for all the agencies within the Lagos State Ministry of Health. This has gone a long way to strengthen the capacity of the hierarchical sub-agencies, keeping them focused on their mandates.

“We believe in health insurance as a tool that we can leverage to quickly cover ground in our quest for UHC and so we have thrown the full weight of our support behind the newly established National Health Insurance Act, and mandated our Lagos State Health Management Agency (LASHMA) to domesticate and enrol residents of Lagos into the Lagos State Social Health Insurance Scheme.

“We are leveraging partnerships with Global organisations like Bill and Melinda Gates Foundation and Global Fund amongst others to explore innovative ways to strengthen our primary health system. In fact, I believe that such organisations’ decisions to directly fund a sub-national like Lagos State is a testament to the clarity of our vision and our drive to achieve results,” he said.

Governor Sanwo-Olu also disclosed that his administration had concluded some innovative schemes in partnership with the private sector to modernise the equipment in the State’s secondary health centres and set up specialised health facilities.

“We have commenced two pilot projects: The Lagos State Oncology Centre and the Omotunde Ajoke Cole Smart Hospital. The success of these projects will mark a new dawn in our health system, where the best of the public and private sectors come together to provide world-class affordable healthcare.

“We are working hard to improve the quality of human resources we have in our health centres. We are also using a system of meritocracy to appoint Medical Directors (MDs) in health centres and ensure continuous medical and administrative education.

Governor Sanwo-Olu said while Lagos State Government was working on innovative mechanisms to pay for healthcare, it also needed to ensure that it was building a healthcare delivery system that could provide decent healthcare services to the people of the state.