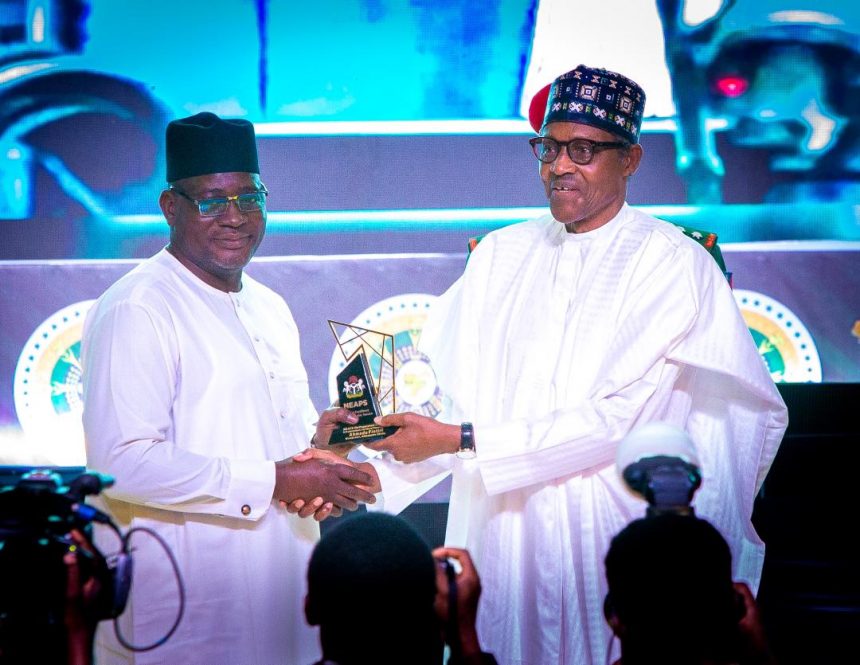 For his exemplary leadership in public service, President Muhammad Buhari, on Friday conferred the Excellence in Public Service Award on the Executive Chairman of the Federal Inland Revenue Service, FIRS, Muhammad Nami, as well as 43 others, including former President Goodluck Jonathan.

President of the Senate, Ahmed Lawan, Minister of Works and Housing, Babajide Raji Fashola, SAN, are among others so awarded too.

The award was presented to Nami by the president in recognition of his efforts at shoring up revenue for the country, by introducing unprecedented institutional, modernisation and technological reforms that have seen the FIRS transform into the nation’s foremost cashcow.

Within his three years in office, Muhammad Nami is renowned to have transformed and repositioned the apex revenue body to ensure efficiency in revenue collection leading to the collection of an unprecedented sum of N6.4 trillion by the FIRS in 2021; the highest ever collected by the Service.

In his remarks, President Buhari noted that the awards were a validation of the work done by the recipients and a motivation to continue to do more.

The president noted that the Nigeria Excellence in Public Service Award put together by the Office of the Secretary to the Government of the Federation in partnership with The Best Strategic Media is an award that recognises and rewards service delivery.

The Secretary to the Government of the Federation, Boss Mustapha, noted that the awards were scorecards of different offices at various levels.

“This is an award that recognises and rewards excellence. It is for the development of public service and the nation at large. Recipients have been carefully selected from both public and private sectors. Nigeria is our nation and we must stand up to protect and defend it”, Boss Mustapha said.

Speaking on behalf of the recipients, former President Goodluck Jonathan, who received an award for Peace Building said it was gratifying that people were recognised based on their service to the nation.

He thanked the organisers of the award for their commitment to national growth and development.

“I thank President Muhammadu Buhari for coming to make the presentation of the award himself. It shows his commitment to excellence in public service. On behalf of the 44 of us, I assure you that we will continue to do our best for the society,” former President Jonathan said.

In an appreciation message, Mr. Muhammad Nami thanked the president for the opportunity to serve, while dedicating the award to the Board, Management and Staff of the FIRS, taxpayers, his family, friends and relatives, among others.

He called on Nigerians to continue to trust the government to deliver good governance while asking that they honour their tax obligations to provide government the resources to build the nation of their dreams.

“I call on all Nigerians to continue to trust the government to deliver good governance to them; to continue to honour their obligations to our country by paying their taxes and building the nation of their dreams in so doing.

“I reiterate that all over the world, it is citizens that build their civilizations through the taxes they pay,” he noted.

The Nigeria Excellence Award in Public Service recognises public officers who have excelled in their duty, transformed their offices and institutions, developed other leaders, and shown good character, innovation and excellence in the delivery of their service, among others.