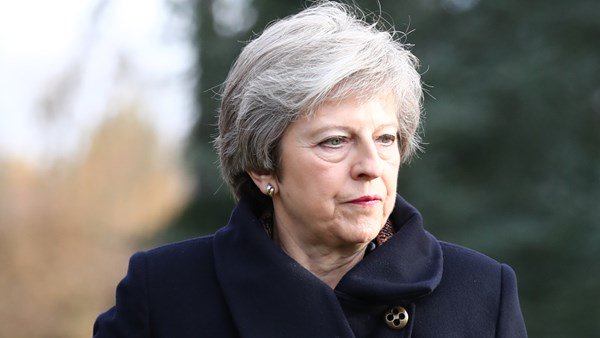 As she gives a statement to the House of Commons on Thursday morning, Theresa May faces a grilling from MPs over the draft Brexit agreement the UK has reached with the EU.

According to a report by the British Broadcasting Corporation, BBC, the PM secured her cabinet’s backing for the deal after a five-hour meeting, although several ministers are understood to have spoken against it.

She has also faced a backlash from Tory Brexiteers and her Democratic Unionist Party (DUP) backers, amid suggestions of moves to force a no-confidence vote.

Labour will announce later whether or not it will back the deal.

However, leader Jeremy Corbyn said he did not believe the agreement – set out in a 585-page document – was in the national interest.

May emerged from the marathon cabinet meeting on Wednesday evening and declared the choice before the UK to be clear.

“This deal, which delivers on the vote of the referendum, which brings back control of our money, laws and borders, ends free movement, protects jobs, security and our Union; or leave with no deal, or no Brexit at all.”

The EU said the agreement marked “decisive progress”, clearing the way for a special summit of EU leaders to approve it.

However, Brexiteer MPs were angered by a “backstop” provision allowing the creation of a temporary “EU-UK single customs territory” to prevent border checks in Ireland in the event no trade deal is in place.

They fear it could leave the UK tied to EU rules for years.

BBC political editor Laura Kuenssberg says the threat of cabinet resignations remains live and that the prime minister could yet face a challenge to her leadership on Thursday.

Assuming she survives in post, Mrs May will face a battle to get the agreement through the House of Commons ahead of the UK’s exit from the EU on 29 March.

A draft agreement on the UK’s withdrawal from the EU, and a statement setting out what the two sides want their future relationship to look like.

It includes a commitment to protect the rights of EU nationals in the UK and Britons in the EU to continue living, working and studying.

There is also a planned 21-month transition period after the UK leaves the EU in March 2019, and a “financial settlement” from the UK, thought to be between £35bn and £39bn.

The most contentious part of the negotiations has been the “backstop”, which aims to guarantee that physical checks will not be reintroduced at the border between Northern Ireland and the Republic, whatever long-term arrangements are agreed further down the line.

The temporary single customs territory set out in the agreement would require some goods being brought to Northern Ireland from the rest of the UK to be subject to new checks and controls.

Northern Ireland would also stay aligned to some other EU rules, so that checks on things like agricultural products and goods standards were not needed.

The EU said this was “indispensable” to avoiding a hard border.

But it is proving controversial.

Brexiteers are angry about the prospect of being tied to EU customs rules long-term, particularly as the arrangement could only be terminated by mutual consent of Brussels and London.

Meanwhile, the DUP has said it will not tolerate anything that creates a new border down the Irish sea.

Both sides have resolved to ensure the backstop is not necessary.