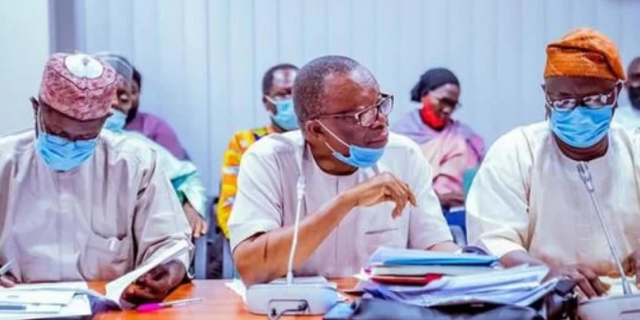 The strike was embarked upon on February 14 to protest federal government’s failure to, among other things, provide needed funds for the revitalization of public universities, and a review of lecturers’ salaries and allowances.

The strike was called off in the early hours of Friday after a meeting held overnight.

BBC quoted the vice president of the union, Chris Piwuna, as confirming the calling off of the strike.

It would be recalled that several negotiation meetings had been held by the federal government and ASUU to no avail to resolve the issue.

The hope of a possible end to the work to rule action was however given on Monday, October 10, when the Speaker of the House of Representatives, and the ASUU president, ASUU president, Prof. Emmanuel Sodeke, addressed journalists.

Gbajabiamila disclosed that the leadership of the striking lecturers was set to sign an agreement to end the dispute based on the recommendations by the House that was presented to President Muhammadu Buhari by the House leadership.

The Speaker also revealed that having received the House recommendations on the issue, President Buhari would, on Tuesday, make a pronouncement towards the final resolution of the issue.

Having assured the leadership of the striking workers at the last meeting with the House leadership and other stakeholders that they (ASUU) would be invited for feedback from the meeting with Mr. President, Gbajabiamila expressed delight that the president’s disposition to the House’s intervention was positive.

He said: “I have visited the president twice. We spoke with Mr. President. There was one of the sticking points, the issue of no work no pay, the president did ask to digest the recommendations and would have one more meeting, which we did on Friday after the budget presentation.

“That meeting was even better than the first one we had with him and Mr. President has agreed to certain things but I’m not going to talk about that now.

“He would disclose whatever it is tomorrow (Tuesday) on that one remaining issue.

“But beyond that, the other issues have been taken care of. We were able to make sure that what ASUU was asking for in terms of the Revitalization Fund, in terms of salary, there has been significant improvement.

“The issue of UTAS is another important issue,  both ASUU and the Office of the Accountant General and the government have agreed that they would work together to resolve the peculiarities of UTAS required for the payment plan and IPPIS. They will sit down together, and the chairman of the House Committee on Tertiary Education will also be part of that tripartite sit-down arrangement to include all those things that are required by ASUU in the IPPIS platform.

“So I believe we’ve covered ground, we’ve covered most of the thorny issues and what we have agreed with ASUU now is basically to put everything on paper and sign off.

“I believe if we had met yesterday and the papers had been drawn up, I’m sure ASUU would have called off the strike today.

“But we’ve only just met today.

“As I have stated, hopefully in the next couple of days, of course, once ASUU gets back to its base as well, once that is agreed, I’m very hopeful and very excited about the possibility or probability that the strike will be called off in a matter of days”.

Also speaking on the issue, Sodeke, who led other members of the union to the meeting, corroborated the views expressed by the Speaker over the signing of the agreement to end the strike.

His words: “My union operates bottom-up. We don’t take decisions without their consent. So we have agreed that between now and tomorrow, we are going to get some documentation signed so that we can take them to our members, and we will do that as quickly as possible in the interest of Nigerians and the students so that this can be resolved as soon as possible.

“From what we have seen today, I think for the first time since our actions started, we are seeing the light at the end of the tunnel”.