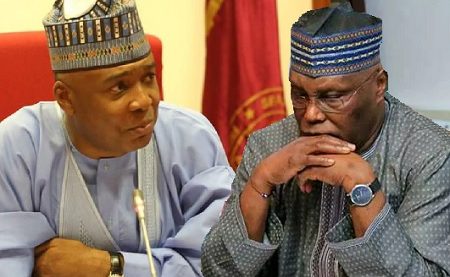 Boko Haram killed her on Tuesday after the Federal Government could not rescue her within the time limit the group gave.

In separate statements Atiku and Saraki express sorrow over the killing.

Said Atiku in a statement signed by his campaign organization:  “This inhuman act is a crime against humanity and Atiku Abubakar wishes to assure first the parents of Hauwa Liman and Saifura Khorsa, and all Nigerians, that he will do everything within his powers to ensure that justice is served to those who committed this heinous act.”

He promised to co-operate with the international community to ensure that those who are still in the captivity of the terrorists and their allies are rescued alive.

In a statement signed by his media aide, Yusuph Olaniyonu, Saraki said it was not expected that  humanitarian workers who worked in crisis zones would be targets of harm.

Saraki who commiserated with the Liman family promised that the Senate would continue to work with the Armed Forces to find a lasting solution to “these senseless killings by insurgents and improve our security infrastructure.”