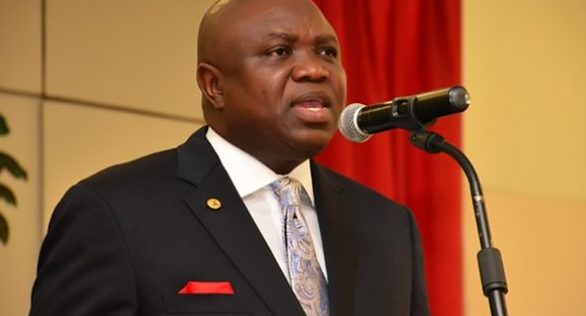 The Governor of Lagos State, Akinwunmi Ambode, on Sunday fought dirty, labelling his opponent in the All Progressives Congress, APC, governorship primary, Babajide Sanwo-Olu as unfit.

He said he had gone through rehabilitation and the records were available for verification.

In addition, the governor said Sanwo-Olu was arrested in the United States for spending fake dollars at a night club.

Sanwo-Olu is Ambode’s only challenged to getting a second term chance for the governorship post the APC primary coming up on Monday.

Sanwo-Olu emerged as the favourite aspirant for the governorship post in the APC in Lagos State having been anointed by former governor of Lagos State, Asiwaju Bola Tinubu.

His emergence followed the disagreement between Tinubu and Ambode.

Sanwo-Olu is being favoured to scuttle the second term ambition of Ambode.

Because he has been favoured by Tinubu, chieftains and members of the APC in the state have backed him (Sanwo-Olu).

Even the lawmakers in the state are also in his support.

But fighting back and fighting dirty, Ambode who addressed a press conference at Alausa, Ikeja, Lagos, berated Sanwo-Olu.

His words:  “We have never responded to the campaign of calumny on social media. We have one family in APC. The aspirant being put up to compete against us is not a fit and proper person to take this job.

“I have done everything in the last three and half years to serve people selflessly and to serve the poor. This particular aspirant is someone who has been arrested for spending fake dollars in a nightclub in America, and he was detained for months.

“He doesn’t have the competence to do what he is being propelled to do. This is somebody that has gone for rehabilitation before. The records are there at the Gbagada General Hospital. We don’t want to go so far. Our leadership should have a rethink.

“I plead with our leaders to have a rethink, it is not about me, it is about the opportunity that APC has.”