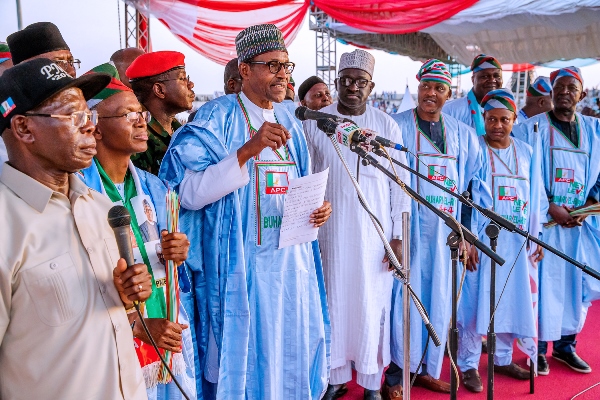 President Muhammadu Buhari has declared that there is no way assets recovered from looters of the nation’s treasury will return to them.

“We shall sell them,” he emphasized.

The president made the declaration on Friday in Kaduna, Kaduna State, during his campaign rally for re-election.

The president said the reason for the decision to sell the property was to ensure that they did not get back to the “looters” as was the case in the past.

“We have taken measures to ensure that recovered funds and assets are not handed back to those who looted the treasury as was done after my detention when my administration was toppled in the 80s.

“What we are doing is to ensure that all recovered assets are sold off and the proceeds lodged into the Single Treasury Account. That way, no one will have the opportunity to appropriate such assets.’

“The anti-corruption fight is difficult in the current democratic dispensation, but we will continue to work carefully and steadily until we insulate public funds from looters,” he said.

Pointing out the success recorded in different areas, the president was emphatic about the achievements in the fight against insurgency in the country.

He said his government had rescued the nation from the grips of the terrorists compared to the situation it met it.

“I have nothing to say than to remind you of the situation we met this country and the promises we made to you.

“So, the best we can do for our country is to return the APC to power.

“The biggest gift we can give to our country is security and sufficiency and economic prosperity,” he said.

He assured that among other things, his government would ensure employment, particularly for the youths.